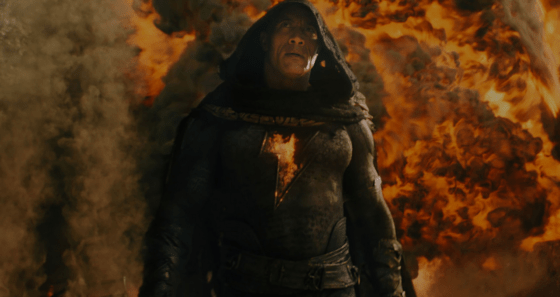 After years of concept art and hype by The Rock about the shifting dynamics of power in the DC Universe, the first trailer for Black Adam is finally here.  Apparently set in the main DCEU (and eventually crossing paths with Shazam), Black Adam is set in the time of the JSA, who discover Black Adam in a tomb and unleash the powerful being back onto Earth.  Black Adam’s motives are unclear and the JSA is ready to either fight alongside him or attempt to take him down depending on which way he decides to go.  Pierce Brosnan co-stars as Doctor Fate with Aldis Hodge as Hawkman, Noah Centineo as Atom Smasher, Quintessa Swindell as Cyclone, and Sarah Shahi as Adrianna Tomaz.  The Rock reteamed with his Jungle Cruise director Jaume Collet-Serra for Black Adam and the movie is out on October 21st this year.  Check out the trailer below.

Batman, Black Adam, The Flash and More at DC Fandome 2021