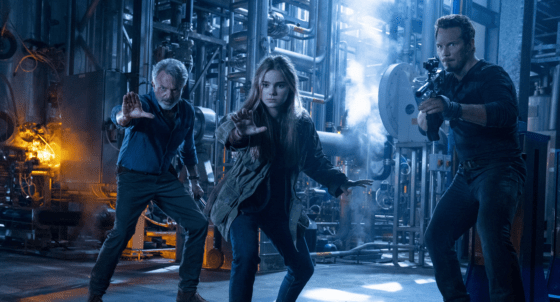 Being billed as the “conclusion to the Jurassic era” and closing out the Jurassic Park/World storyline, Jurassic World: Dominion has some fun moments and the very welcome return of the OG Jurassic Park trio of Sam Neill, Laura Dern, and Jeff Goldblum but is overall kind of a bloated finale that is neither truly terrible nor particularly great.

Picking up 4 years after Jurassic World: Fallen Kingdom, the world has been struggling to deal with the spread of dinosaurs released from the underground auction in Fallen Kingdom.  Biosyn, Ingen’s former rival, has built a sanctuary in Italy and is taking in any dinosaurs captured there, studying them, and trying to use their prehistoric DNA for modern medical and pharmaceutical research.  Lewis Dodgson (Campbell Scott), last seen hiring Dennis Nedry to steal the dinosaur embryos in Jurassic Park, is now the CEO of Biosyn and is up to some shady business behind their seemingly benevolent facade, which draws the attention of Dr. Ellie Sattler (Laura Dern), who recruits Dr. Alan Grant (Sam Neill) to help her get evidence of their wrongdoings.  Meanwhile, Owen Grady (Chris Pratt) and Claire Dearing (Bryce Dallas Howard) have been trying to keep Maisie Lockwood (Isabella Sermon), who was revealed to be a cloned human in Fallen Kingdom, hidden and safe but she’s taken, along with Blue the Raptor’s infant raptor, which sends Owen and Claire on a quest to rescue them.  The two plots are very separated and only coincidentally combine late in the movie.  When the entire cast finally gets together, it is fun with some comedic moments and new pairings put in familiar situations, but we should have gotten to that stuff sooner.  Part of that is probably the runtime, which is close to 2 and half hours, and it’s definitely overstuffed and feels its length at times.  There probably could have been some stuff that was trimmed up to make the movie short and get the cast together faster.  The other issue with the plot is that the main one with Ellie and Grant feels really out of left field and not really what the movie’s trailers were selling.  If you were expecting this sort of task force going around gathering up dinosaurs like I was, you’re probably going to be pretty disappointed and the actual plot is only tangentially related to dinosaurs and more on the genetic engineering/DNA side of things.  Perhaps they felt like they had to change things up after the last two movies had their genetically modified dinosaurs (the Indominus Rex and Indoraptor) but dinosaurs are the main selling point of this franchise and they kind of take a backseat in what is possibly the final movie of the franchise.  There are hints of what that movie could have been, with stuff like an illegal dinosaur black market in Malta and some of the footage we see of humans and dinosaurs colliding and I would have been much more engaged and interested in that movie. They also double down on the Maisie plot, which already felt really out there and world-breaking in Fallen Kingdom, and somehow make it weirder and crazier with more revelations about Maisie’s “mother”, Catherine Lockwood that also ties into Dr. Wu, played again by BD Wong.

There are a few fun setpieces in Dominion, most notably the sequence in Malta where Claire and Owen infiltrate the aforementioned dinosaur black market and run afoul of Santos (Dichen Lachman), who is a dinosaur arms dealer who unleashes trained attack raptor on them, leading to a sort of Mission: Impossible style chase through the city.  There’s also a fun sequence in an old amber mine at the Biosyn complex which features Dimetridons stalking in the dark.  Overall, the dinosaur variety is pretty great in Dominion, with lots of species we haven’t really seen before in the series, like a creepy, blind Therizinosaurus or the Giganotosaurus, which gets hyped up as the new big bad like the Indominus Rex or Spinosaurus but doesn’t really do a whole lot.  There are also returning favorites like Dilophosaurus, which we haven’t seen since the OG Jurassic Park and they also introduce “unaltered” dinosaurs that are more scientifically accurate, as the in franchise lore is that Ingen modified the DNA to make them more like people wanted them to look and not how they actually might have been, like having feathers or fur.  There are a bunch of homages and direct sequences that call back to sequences from, mostly, Jurassic Park that are amusing fan service but, on the flip side, there are also some sequences that feel like they are recycling stuff from Jurassic World, especially the big climax for Dominion.

The cast is solid overall with the original trio slipping easily back into their roles, especially Sam Neill who has some good grumpy Grant moments, and Chris Pratt and Bryce Dallas Howard are fine but not really doing much different than in the prior two Jurassic World movies.  The definite standout for new characters is DeWanda Wise as Kayla Watts, a former Air Force pilot turned smuggler who helps Owen and Claire.  She’s got a great cocky attitude and badass action chops and is easily one of the best characters introduced in this new trilogy and probably for the franchise as a whole.  One cast member that doesn’t really work is Campbell Scott as Dodgson.  Scott has been great and intimidating in other projects before but I don’t know what he’s doing here with awkward interactions that seem to imply they’ve put him on the spectrum but then still is also a greedy, evil businessman only concerned with money.  It’s a bizarre character that doesn’t work and doesn’t ever feel like a threat or villainous the way he should be.

Jurassic World: Dominion has some fun moments and some great character interactions at times but the plot is not really what I was expecting and seems a bit incongruous to what the franchise has been about and, most disappointingly, it kind of puts the dinosaurs on the back burner.  It’s also kind of bloated and overstuffed but it’s at least a slightly better finale (if this is actually the final movie) than something like The Rise of Skywalker, which was just a giant mess all around.  There are decent set pieces and fan service callback moments but you probably don’t need to rush out and see it, especially with much more satisfying blockbusters out there like Top Gun: Maverick.