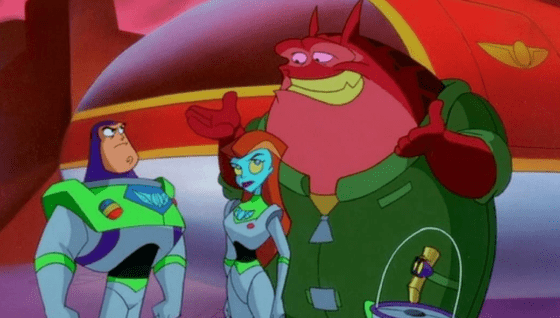 Lightyear is hitting theaters this weekend and is telling the “true” story of Buzz Lightyear but there was already an excellent take on Buzz and his adventures throughout space, Buzz Lightyear of Star Command.  Coming out in August of 2000, the series kicked off with an original movie, Buzz Lightyear of Star Command: The Adventure Begins, which became the first three episodes of the main animated series.  Patrick Warburton voiced Buzz for the main series and voiced him for The Adventure Begins as well but the video release saw Tim Allen return to voice Buzz, which earned him a Video Premiere Awards nomination.  The show followed Buzz earlier in his career as he patrols the galaxy with a team of rookie Space Rangers; Princess Mira Nova (Nicole Sullivan), Booster (Stephen Furst), and robot XR (Larry Miller).  The team took on Zurg, voiced by Wayne Knight, and his various minions and hired goons.  The main series aired on Saturday morning for Disney’s One Saturday Morning block, running for 62 episodes between October 200 and January 2001.  The series was well received, earning a Daytime Emmy Award and a video game spin-off developed by Traveller’s Tales but it’s currently not available on Disney+ and only The Adventure Begins got a VHS release, with no complete series DVD or Blu-Ray ever made.  You can watch The Adventure Begins below via Youtube.