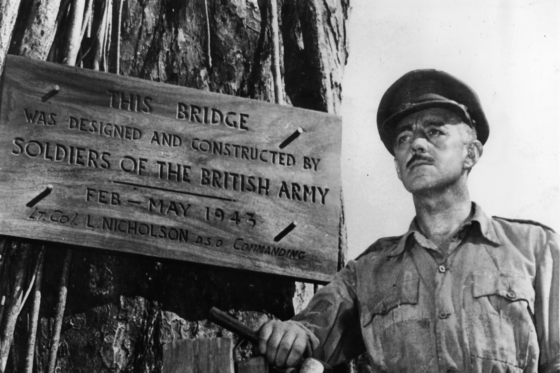 Easily one of the best World War II movies and widely considered one of the greatest movies ever made, you can watch The Bridge on the River Kwai below for the latest Everything Action Theater.  Starring the great Sir Alec Guinness as Col. Nicholson, he and his men are captured by the Japanese during World War II and held as POWs in a prison camp in Thailand.  Nicholson and his men are forced to build a railway bridge on the Kwai River and a battle of will ensues between Nicholson and the camp’s commander, Saito (Sessue Hayakawa).  Unbeknownst to the POWs, a commando raid is being organized to storm the camp and free them, led by American Navy Commander Shears (William Holden), who is the only person to have successfully escaped the Thai prison.  The movie was the highest-grossing film of 1957 and won seven Academy Awards, including Best Picture.  The movie was ranked #36 on the last AFI Top 100 Films list and its ranked #11 on the British Film Institute’s list of the greatest British films ever made.  You can watch the entire movie below thanks to YouTube.

Everything Action Theater: Guys and Dolls

Everything Action Theater: Alien vs Ninja