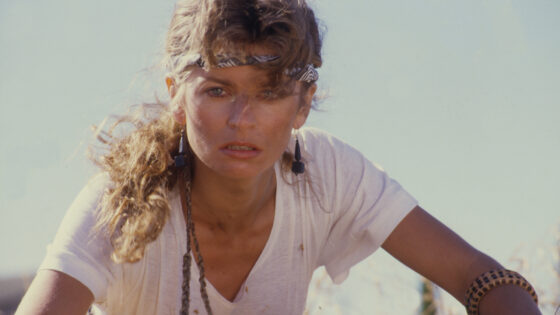 A cult classic from 1986, Fair Game is back and available on VOD (and select LA theaters) from Dark Star Pictures.

Set in the Australian Outback, Cassandra Delaney stars as Jessica, who runs a wildlife preserve for kangaroos and other animals.  A trio of sleazy and menacing poachers (Peter Ford, David Sandford, and Garry Who) arrive at the preserve and begin killing kangaroos and running afoul of Jessica.  An escalating conflict builds as the poachers invade Jessica’s privacy and threaten her and her animals while she tries to figure out a way to get rid of them, as the local police are no help.  My main issue with Fair Game is its somewhat repetitive nature in regards to its plot.  It kind of recycles the same plot beats over and over with the poachers doing something to Jessica, Jessica setting out to confront them and getting roughed up or chased, and then repeating.  It also doesn’t really ratchet up the stakes until the last 20-15 minutes, when it spikes up to deadly levels for both parties.  Before then it feels more like nasty pranks (although one where the poachers tie Jessica to the front of their jeep naked is almost the equivalent of an I Spit on Your Grave style sexual assault).  The ending is pretty fantastic, with Jessica finally coming up with a plan to stop the poachers for good and turning what’s left of her home into a Home Alone-style death trap but I wish the entire movie was more of that.  I was also a bit disappointed by the tease at the beginning of the movie where you get a crazy stunt sequence where one of the poachers, Ringo (Sandford) jumps between three different vehicles speeding down the road and it seems like he actually did his own stunts.  It’s a crazy sequence out of a George Miller movie but the movie doesn’t really come back to anything like that until the finale.  It’s also a bit less violent than a lot of similar “Ozploitation” movies, at least until the ending, with more animal carcasses than human ones and it’s fairly tame compared to something like The Road Warrior.

The movie looks fantastic with great shots of the Outback and fantastic use of the natural landscape for some of the chases and tense sequences.  You also really get a sense of the dirty, sweaty nature of the Outback through the set design and costumes, as everything gets caked with dust in short order during driving and chase sequences.  Cassandra Delaney is a solid protagonist who gets put through the wringer in the movie, especially in stuff like the aforementioned scene where she’s strapped to the front of a jeep and it makes the ending even more satisfying when she finally goes full commando and takes on the three evil poachers directly.  The poachers are a unique trio with Ringo being the parkouring hot head, Peter Ford’s Sunny being the more comic relief mechanic, and Garry Who being the more pragmatic and calm leader.  One thing that really stands out in the movie is their vehicles, which includes a panel truck with a great white shark painted on the back and a hunting jeep that has so many accessories it almost feels like it’s from a sci-fi movie and the sound design also makes the engine sound like some kind of monster.  The scenes where the poaching trio is hunting at night are very distinctive and evocative as the jeep feels like some sort of horrible beast prowling the Outback.  One thing that you will probably either love or hate is the movie’s score, which is kind of out of control with the constant nature of it and the ridiculous intensity and style of some of the music tracks.  You’ll either love it for its over-the-top nature or think it’s a cacophonous mess.

Although I don’t think I’m quite as big a fan of Fair Game as say, Quentin Tarantino, who thinks incredibly highly of it and apparently used it as one of the inspirations for Death Proof, it’s still a solid “Ozploitation” movie.  I think I’d prefer if it was more like a traditional revenge movie with that genre’s plot escalation than the sort of repetitive back and forth that Fair Game has but it has a great opening and great ending and the performances and locations keep things interesting enough to keep watching.  You can watch Fair Game now VOD and it will be out on physical media in August.