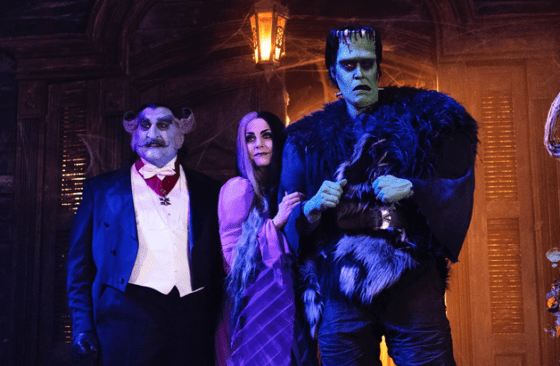 Rob Zombie is best known for his gritty horror movies like The Devil’s Rejects and his Halloween remakes but he’s taking a lighter tone in September by bringing back The Munsters.  A remake of the classic 60s sitcom, Jeff Dan Phillips stars as Herman Munster, Sherri Moon Zombie as Lily and Daniel Roebuck as Grandpa, with the movie seemingly focusing on the budding romance between Herman and Lily and their attempts to adjust to life in Mockingbird Heights.  Richard Brake, Sylvester McCoy, Jorge Garcia, Cassandra Peterson, Dee Wallace, Catherine Schell and OG Munsters cast member Butch Patrick co-star.  It’s not clear if Zombie is going for an intentionally cheap and cheesy look or if there was some sort of budget issue but this movie looks rough as far as the sets and the style and definitely doesn’t seem like a big theatrical release.  It’s also apparently going to be a family-friendly PG-rated film in contrast to Zombie’s usual violent and gritty style.  The Munsters is apparently going to have a hybrid theatrical/Peacock release in September and you can check out the trailer below.