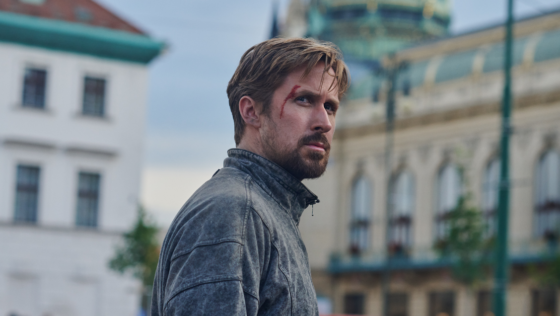 One of the biggest movies in Netflix’s history with a budget of over $200 million, The Gray Man is a massive globe-trotting action blockbuster that delivers on the set pieces, even if the plot is nothing we haven’t seen before.

Directed by Joe and Anthony Russo, the directors of Captain America: The Winter Soldier and Avengers Infinity War and Endgame, Ryan Gosling stars as Courtland Gentry aka Sierra Six.  Convicted of murdering his father, he’s recruited from prison by CIA officer Donald Fitzroy (Billy Bob Thornton) to join a black ops CIA program.  Six agrees and is on the job for 18 years.  On a mission to Bangkok, Six learns that his latest assassination target is a fellow Sierra agent, who has information that the CIA’s rising star, Denny Carmichael, is illegally using CIA assets for his own gain.  Six goes rogue to try and uncover the truth and Carmichael sends former CIA asset turned mercenary Lloyd Hansen, who is also a violent psychopath, to track down Six and recover the stolen information.  The plot isn’t really anything we haven’t seen before in stuff like Mission: Impossible or Bourne and there aren’t really any shocking twists or stuff that you won’t see coming if you’re a fan of the genre.  It does move at a fast clip, so that helps some of the boilerplate plot elements go past without dwelling on their sameness.  Another thing that helps is the cast.  Ryan Gosling feels a bit like a mix between his character from Drive and his character from The Nice Guys and he does a great of switching into action mode but then having some sort of witty remark or “can you believe this crap?!” response to surviving the insanity around him.  Chris Evans also seems like he’s having an absolute blast as the polar opposite of Captain America, a psycho who only cares about money and gleefully inflicts pain.  Rege-Jean Paul is appropriately slimy as Carmichael and Ana De Armas continues her string of great supporting action roles after stuff like No Time to Die and it makes me even more excited to see the John Wick spin-off starring her.  The only person who seems kind of wasted is Jessica Henwick as Suzanne Brewer, who is forced to join Lloyd on his operation and exists to just nag and berate him and she really doesn’t really get to any martial arts or get involved with the action, even though we’ve seen that she’s very proficient at action.  It’s not quite as bad as Mile 22 literally handcuffing Iko Uwais for most of the movie but she definitely could have been more involved.

The action is definitely the main reason to watch The Gray Man, as there are tons of massive set pieces in The Gray Man and it gets started pretty much right off the bat with, literally, an explosive sequence in Bangkok that has Six fighting someone in the middle a fireworks barge, as fireworks are going off, and there’s a huge set piece in the middle of the movie in Prague the features an insane sequence on a pedestrian tram and multiple teams trying to take out Six.  There are also multiple fights against Indian superstar Dhanush that are fantastic, with one being a highlight of Ana De Armas, who takes him on solo at one point.  The Russos manage to find interesting locales for their action that keeps the action exciting and makes it all stand out from similar sequences in other movies and it all looks incredible, with the opening in Bangkok in particular definitely being a way to show off your TV if you have 4K/HDR.

The Gray Man may not do a whole lot new or original but it’s fast-paced and full of fantastic action and the cast does a great job of keeping things interesting and fun even if they are going through beats we’ve seen a few times before.  If you have Netflix, this is easily one of their best original movies, up there with stuff like Extraction.