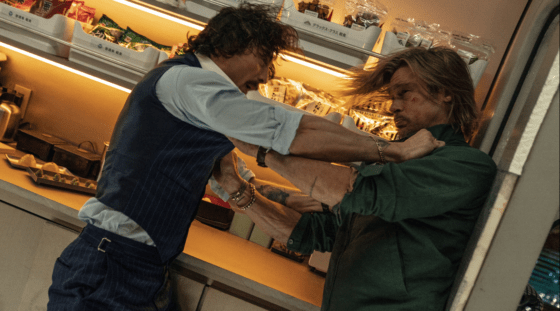 After helping kick off the John Wick franchise, director David Leitch has been keeping busy with movies like Atomic Blonde, Deadpool 2, and Hobbs & Shaw.  He brings the snarky tone of Deadpool and the action style of John Wick to the fun and ridiculous Bullet Train.

Brad Pitt stars as an assassin codenamed Ladybug.  Out of the game for a while and going to therapy, he gets assigned what is supposed to be a simple job aboard a Japanese bullet train: snatch a specific briefcase and get off the train.  Ladybug soon realizes that there’s a lot more going on aboard the train as multiple other assassins, including the “twins” Lemon (Brian Tyree Henry) and Tangerine (Aaron Taylor-Johnson), The Prince (Joey King), The Wolf (Benito A. Martínez Ocasio) and Yuichi Kimura (Andrew Koji), with everything seemingly tied to the head of the biggest crime syndicate in the world, The White Death (Michael Shannon).  The movie does a pretty great job at doling out information at a good pace, like introducing the fact that there’s a stolen poisonous snake on board and then revealing why later on but the beginning of the movie is also kind of disjointed as there are multiple cutaways to character’s backstories or bits like an extremely Deadpool sequence where Lemon and Tangerine explain exactly how many people they killed before arriving on the train.  The second half slows down on the flashbacks and cutaways and the movie’s pacing and plot are helped immensely by it.  The ending is arguably a bit too over the top compared to everything that came before but if you can buy into there are lots of fun and cool bits but there is a lot of suspension of disbelief about the survivability of things that happen that needs to happen.

Brad Pitt and basically the entire cast are great and are fully on board for the snarky, bantering tone of the movie, with the exceptions of Andrew Koji and Hiroyuki Sanada, who seem plucked from a much more serious and dramatic Yakuza/assassin movie.  They are both great but their serious tone definitely clashes with the big, over-the-top personalities of the other characters.  I love everything Brad Pitt is doing in this movie with his attempts to maintain positive headspace and his attempts to defuse situations with psych babble from his therapist but he also does a great job with the fights, which combine the John Wick style of high choreography with some Jackie Chan style slapstick, with every fight seemingly utilizing a lot of the props around the environment the same way Jackie does.  Joey King is definitely a standout as she is probably the most devious person on the train but is able to constantly get away with things by playing up her innocent and scared schoolgirl persona and there are even some jokes about characters saying how good her acting is.  Brian Tyree-Henry and Aaron Taylor-Johnson have some great rapport as the twins but there is a running joke about Thomas the Tank Engine with Tyree-Henry’s character that is funny at first but gets beaten into the ground by the end of the movie.  Someone obviously thought that was the funniest bit in the world but it’s used way too often.  Michael Shannon is wonderfully over the top when he arrives in the third act and everything from his look to his Russian accent is fantastic. There are also some fun cameos from some of Brad Pitt and David Leitch’s famous friends that are great when they pop up.

Bullet Train is overall a fun, over-the-top action movie that maybe gets a little too over the top for it’s finale but if you can suspend your disbelief for that, the cast is a ton of fun, there’s fun action and fights throughout and it’s just a solid ride that doesn’t take itself seriously.