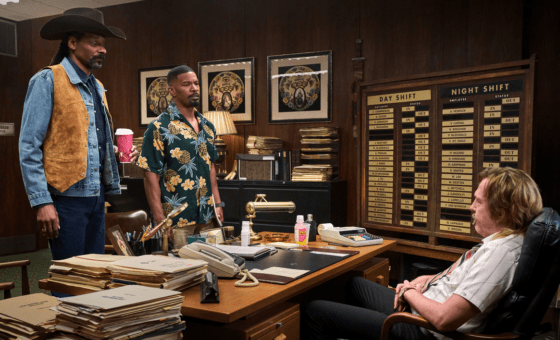 Jamie Foxx returns to Netflix after the solid Project Power in 2020 with Day Shift, a vampire horror/comedy with fantastic action but some undercooked characters and plot beats.

Foxx plays Bud Jablonski, who has a cover job as a pool cleaner but secretly hunts the vampires that reside in the San Fernando Valley.  Needing $10,000 for his daughter’s school tuition and braces to prevent his ex-wife from moving to Florida, Bud gets his buddy Big John Elliott (Snoop Dogg) to vouch for him and get him back into the vampire hunters union, which offers bigger paydays for vampire fangs.  Reluctantly allowed back in, Bud is saddled with a union rep, Seth (Dave Franco), who is tasked with keeping Bud working by the book.  The main big bad is Audrey (Karla Souza), a local real estate mogul who is hatching a plan to buy up the local land and develop a powerful sunscreen so that vampires can rule the day and the night.  The movie does a great job fleshing out the world of the vampire union, similar to how the secret world of The Continental works in producer Chad Stahelski’s John Wick series, but much more humorous.  There are different types of vampires, an economy for fangs, and many regulations about hunting and it’s all presented in a fun way.  The actual villain plot is lacking, however, as Audrey is one note and the plan is only vaguely fleshed out and somehow involves a From Dusk Till Dawn style temple hidden under the valley and taking out other rival vampire crime bosses and I wish we got more of her as a friendly realtor to contrast her vicious vampire queen side.  There are also some things lacking from some of the side characters, like Natasha Liu Bordizzo as Bud’s new neighbor Heather.  It seems like they are setting up multiple things, including a possible romance with Bud and potentially being a vampire plant but she pretty much disappears as soon as she’s introduced and comes back for the final act with an exposition dump that seems to suggest she and Bud were hanging out but we never saw it?  She feels like an afterthought and a lot of her stuff could have probably been condensed into another character.

Where Day Shift truly shines is with its action sequences.  Director JJ Perry is a martial artist and stuntman who worked on the Mortal Kombat movies back in the day and has recently been the stunt coordinator on movies like Star Trek Into Darkness, Bullet to the Head, and Machete Kills.  Much like Chad Stahelski, David Leitch, and Sam Hargrave, Perry knows how to do awesome, practical action and it’s on display in Day Shift.  Although there’s obviously CG, most of the action feels visceral and real, with a mix of highly choreographed gunplay a la John Wick to martial arts, including the show-stopping middle set piece that features Scott Adkins and Steven Howey as the brotastic vampire hunting superstars The Nazarian Brothers.  There’s also a really cool use of contortion, as vampires (or certain types of vampires) can bend themselves into pretzels to fight and it sort of feels like what James Wan brought to the insane finale of Malignant last year.  There’s also a pretty cool car chase that goes on the road and off-road and ends, as always, along the Los Angeles River.  The action feels like an evolution of what Blade did back in the late 90s and early 2000s but with the current modern action style and I would hope Marvel sees this and takes some of it for the upcoming Blade reboot with Mahershala Ali.

Jamie Foxx is great as Bud and this movie realizes what Project Power didn’t, which is that Foxx is best when he’s charming and cracking wise and not serious and dour.  Foxx and Franco have great banter and become a sort of buddy-cop duo and Foxx’s effortless cool clashes hilariously with Franco’s neurotic uptight nature.  Snoop Dogg is also incredibly cool as Big John, a legendary vampire hunter who dresses like a cowboy and wields a minigun.  The aforementioned appearance from Scott Adkins and Steve Howey is the highlight of the movie and I wish there was more from them but maybe like The Gray Man we can hope for a spin-off movie? As previously mentioned also, Karla Souza is fine as the villain but kind of one note and it would have been fun to see her public-facing face to contrast with her vampire queen side, which could have added some fun to Bud trying to prove to everyone that this seemingly wholesome realtor is a bloodthirsty monster.  Peter Stormare shows up to do his usual Peter Stormare thing as a sleazy pawnshop owner and Eric Lange fills the role of the pissed-off police chief, although in this case, he’s the pissed-off head of the LA vampire union.

Day Shift is a fun movie with some incredible action that is worth watching just for that.  Jamie Foxx and Dave Franco have a tremendous and hilarious buddy-cop dynamic but some of the other characters and the actual main plot are kind of lacking.  I would definitely be up for another movie in this world now that things are established and explore more of the vampire world and the vampire union that hunts them.

One thought on “Review: Day Shift”