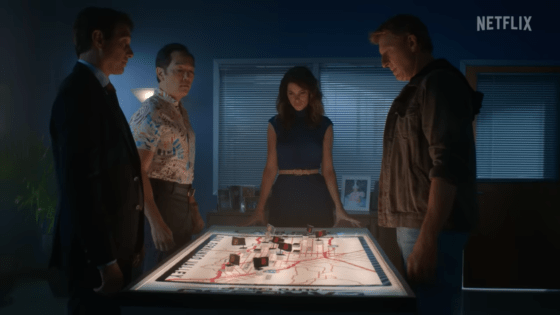 Cobra Kai is back for its fifth season in September and Eagle Fang and Miyagi-Do are the Rebel Alliance to Cobra Kai’s Empire in an all-out karate war for the valley.  After their victory at the All Valley tournament in Season 4, Cobra Kai, under the reign of Terry Silver (Thomas Ian Griffith), has rapidly expanded with tons of new dojos and new senseis to train its particularly brutal style of combat.  As part of their agreement, Johnny (William Zabka) and Daniel (Ralph Macchio) have shut down their dojos but Daniel brings in his old rival turned ally Chozen (Yuji Okumoto) to help take down Silver.  Meanwhile, the rivalry between the former Eagle Fangs and Miyagi-Dos and the Cobra Kais continue, especially between Robby (Tanner Buchanan) and Miguel (Xolo Maridueña).  The new season begins on September 9th and you can check out the trailer below.