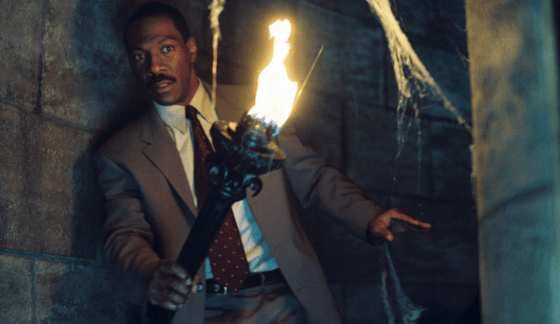 For 2003’s The Haunted Mansion movie, Nelly contributed the song “Iz U” to the movie’s soundtrack.  Based on the beloved Disney attraction, The Haunted Mansion found Eddie Murphy and his family traveling to the Gracey Manor in Louisanna to make a massive real estate deal but instead find themselves caught up in a supernatural adventure.  The movie received mostly negative reviews and while it made over $182.3 million worldwide, it was considered something of a financial disappointment as well, especially compared to the blockbuster global success of the Pirates of the Caribbean franchise.  Nelly’s “Iz U” similarly didn’t have a lot of success and while it was released as a single, it didn’t receive a lot of airplay.  It did chart in the UK.  Along with being featured on The Haunted Mansion soundtrack, “Iz U” was also on Nelly’s Da Derrty Versions: The Reinvention album and as a bonus pop culture tidbit, it sampled the theme song for “The People’s Court”.  For the music video, Nelly kept things spooky with the plot of the video being that Nelly has inherited a creepy mansion from an uncle and he and his posse roll up to throw a house party to celebrate.  However, an evil spirit (also played by Nelly) begins to haunt and possess the partygoers.  Check out the video below.