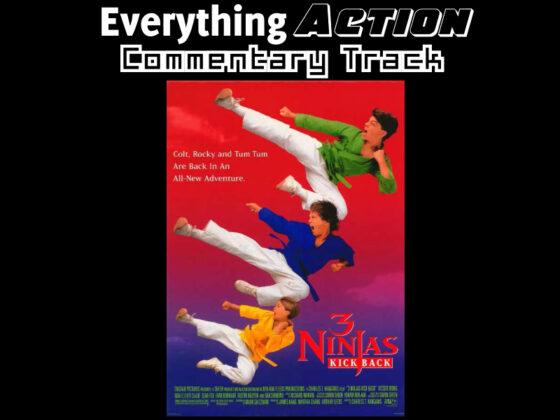 As is tradition, to celebrate Chris’ birthday with a ridiculous martial arts movie, Zach, Chris, and special guests Addam, Justin, Asa, and Janice watched the 1994 classic, 3 Ninjas Kick Back.  Although it’s the second movie released in the franchise, Kick Back is technically the third movie chronologically and features only Max Elliott Slade back from the original movie as Colt and Rocky and Tum-Tum played by new actors Sean Fox and J. Evan Bonifant.  Still training in martial arts with their grandfather Mori Tanaka (Victor Wong), the 3 Ninjas eventually must travel to Japan to deliver a special dagger, which Mori won years ago in a tournament, to give to the new winner of the tournament.  Mori’s old rival Koga (Sab Shimono) is after the dagger as revenge against Mori for injuring him in the tournament they fought in and to use it to unlock a legendary golden treasure.  While watching the movie, the gang discusses how much baseball there is in the movie, the Korean pop songs used to set the tone for Japan, the inept ninja army of Koga, Koga’s ridiculous glam rock nephew, Lisa DiMarino, and more.  You can rent 3 Ninjas Kick on services like Prime Video or sync up a DVD copy to watch along with the Everything Action crew.

You can find Adam at @addamthecomic on Twitter and Twitch and at theadman2315#2135 on Discord.  Also check out his friend Mike Rainey’s book On Percs here: https://www.onpercs.com/store/p/golden-mist-cup-weny8-k3h8l

Everything Action Commentary: The Octagon