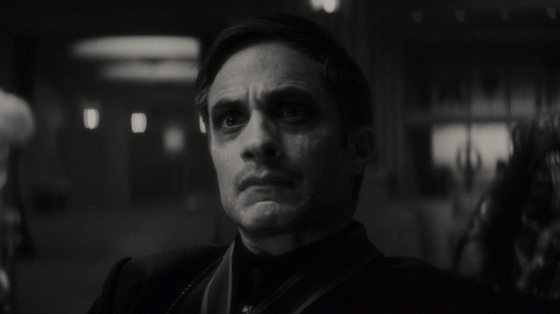 The first ever MCU “Special Presentation”, Werewolf by Night does a fantastic job of bringing the monstrous side of the Marvel universe to Disney+.

Although shot like a classic Universal Monsters movie, Werewolf by Night seems to be set in the present day of the MCU.  A gathering of hunters has arrived at Bloodstone Manor following the death of legendary monster hunter Ulysses Bloodstone.  A ritual hunt has been set up to determine which of the hunters will become the new wielder of the Bloodstone, a powerful weapon that can weaken and kill the various monsters and creatures of the MCU.  Among the hunters is Jack Russell (Gael Garcia Bernal), who is not what he appears to be, and Elsa Bloodstone (Laura Donnelly), the estranged daughter of Ulysses Bloodstone.  Bernal and Donnelly are definitely the standouts of the human cast along with Harriet Sansom Harris as Verussa Bloodstone, Elsa’s sadistic stepmother who has setup this entire event.  If you’ve seen The Nevers, Elsa feels very similar to Donnelly’s character there, Amalia True, with the same fighting prowess and cynical, sarcastic attitude.  Bernal is charming and funny as Jack and his surprising aversion to fighting is a great clash with the other hunters, who want to take each other’s heads along with killing the creature they are hunting.  That creature turns out to be Ted aka Man-Thing, who definitely steals the entire special when he appears and the special does a great job of making him endearing and terrifying at the same time.  If you’re his friend, he’s a lovable Grootesque creature but he can also disintegrate you in a horrific fashion.

One of the most surprising things about Werewolf by Night is the amount of gore present.  Disney seems to have given director Michael Giacchino a pretty long leash and he uses it to unleash the kind of gnarly violence we haven’t really seen since the Netflix Marvel shows.  Heads get split in half, limbs are ripped off, “Ted” melts people with his powers, it’s awesome and hopefully means future MCU projects will get to push the envelope as well.  The action that leads into the violence is also pretty excellent throughout, including some cool fights between Elsa and some of the other hunters and the big climax where Jack’s true nature is fully unleashed.  The special does a great job of blending homages to classic horror movies with certain shots or sequences while also making sure stuff like the action feels modern and cool.

Werewolf by Night is easily one of the best entries in the MCU this year and hopefully, we’ll see more “specials” like this in the future and more MCU entries that take chances like this did stylistically and violence/action-wise.  It’s also a great debut directing for Michael Giacchino, who is obviously best known as a composer, and I’m definitely interested to see what he directs in the future.