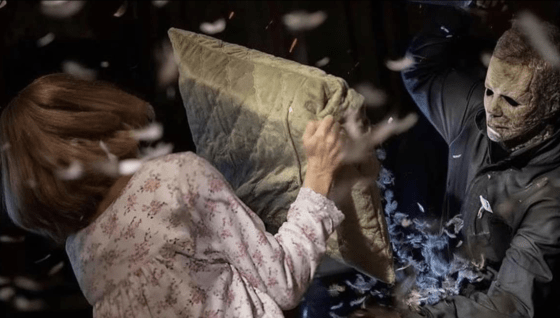 The “final” chapter of the new Halloween rebootquel trilogy that began in 2018, Halloween Ends is a bizarre and terrible way to cap off this new series and potentially the eternal battle between Laurie Strode and Michael Myers.

Picking up 4 years after the baffling mayhem of Halloween Kills, Laurie Strode (Jamie Lee Curtis) and her granddaughter Allyson (Andi Matichak) are trying to live everyday lives in Haddonfield, with Laurie working on a book and Allyson working as a nurse at the local hospital.  Michael Myers (James Jude Courtney) has not been seen since his Halloween rampage. However, Haddonfield seems to be still stuck in a cycle of violence and evil with multiple citizens killing themselves or others.  Local college student Corey Cunningham (Rohan Campbell) becomes part of a tragic accident on Halloween 2019 when the boy he’s babysitting is killed after trying to prank Corey and Corey becomes a pariah in Haddonfield.  When Laurie sees him getting bullied by some local teens which results in him getting a cut on his hand, she brings him to the hospital to get fixed up, both with his hand and with Allyson.  While they start to build a budding romantic relationship, the endless harassment Corey gets at home and from the town begins to grow the dark side within him.  Much like Jurassic World Dominion earlier this year, the actual plot of Halloween Ends is drastically different than what was pitched in the marketing.  If you were expecting the epic final battle between Laurie and Michael, you sort of get that in the end but most of the movie is bafflingly focused on Corey, a character we have never seen in this trilogy or any other Halloween movie and we’re expected to get super invested in his descent into darkness and his relationship with Allyson and Laurie.  It doesn’t help that it feels like this entire movie feels like it takes place over a couple of days, so everything feels hilariously rushed and unrealistic, like Allyson and Corey having one date and then being ready to fully leave Haddonfield behind and running away together or Laurie going from fixer-upper to suspicious that Corey is a monstrous killer seemingly overnight. My one hope going in after seeing the mess that was Halloween Kills is that they were saving their good ideas for the finale but this feels like a script for a completely different movie that got Halloween characters stitched onto it.  Laurie and Michael are both put on the back burner for probably 80% of the movie to focus on Corey, a character I couldn’t care less about, and as a result, most of the movie is either boring or annoying as you wait for the faint glimmers of Halloween to peek through.

There’s no consistency to the characters either.  I think most of us were fully on board for Sarah Connor-style Laurie in 2018’s Halloween but all of that militarized, badass survivor stuff is all but gone as Laurie seemingly just decides to get over everything and live a normal life, baking pies for Allyson, flirting with Frank (Will Patton) and writing her memoirs in a nice little house in town.  There seems like there’s going to be an interesting turn with Allyson where maybe everything that happened has darkened her as well, but that doesn’t really go anywhere and neither does the idea of Haddonfield, the town, being evil and Michael just being one of the many incarnations of that evil.  Rohan Campbell is somewhat sympathetic as Corey but where the movie goes with him is just kind of insulting to long-time fans of the franchise and actually feels more like what happened over in the Friday the 13th franchise than in the Halloween series.  Halloween Ends does cut back on the wacky side characters, which is a plus, focusing mostly on Corey, Laurie, and Allyson, so there are no tangents like the gay couple from Halloween Kills (well, there is a bit with a doctor and the nurse he’s sleeping with but that’s about it) and no group stupidity from the town, who seemingly learned their lesson about going after Michael after half of them got massacred following Tommy Doyle.

One other department where Halloween Ends is lacking is in the kills.  Say what you will about Halloween Kills, but the highlight of that movie was definitely the amount of ridiculously over-the-top, gory kills and Halloween Ends definitely falls short of the standard of the previous two movies in this new trilogy.  There are a couple of decent kills and the final battle between Laurie and Michael is solid, but definitely not up to the hype of the marketing, but when the movie doesn’t even have the fun gore to carry you through, you are pretty much left with nothing to get you through the slog.