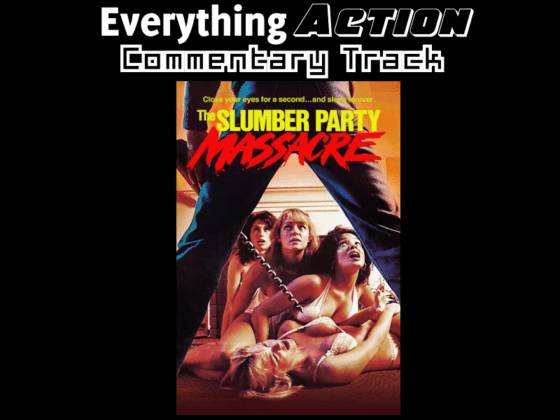 For the latest Everything Action Commentary, Zach and Chris celebrated the 40th anniversary of the cult horror classic The Slumber Party Massacre.

Initially hitting theaters in 1982, The Slumber Party Massacre was part of a loose umbrella “Massacre” series that included two other Slumber Party Massacre movies as well as Sorority House Massacre and Cheerleader Camp Massacre. It was originally supposed to be a parody of the 80s slasher genre but was transformed into a more straightforward entry in the genre.  The movie follows a group of high school girls, most notably Trish Devereux (Michelle Michaels), who is having a slumber party with some of her friends.  Unfortunately for the girls, serial killer Russ Thorne (Michael Villella) has escaped prison and is back on a rampage with his weapon of choice, a giant industrial drill.  The guys try to figure out what the deal is with weird sisters Valerie (Robin Stille) and Courtney (Jennifer Meyers), who live across the street from the slumber party, and also creepy neighbor Mr. Contant (Rigg Kennedy), everyone’s obsession with basketball, the practicality of a giant drill as a weapon, why everyone seems to listen to light jazz and more.  The Slumber Party Massacre is available on Roku Channel, Tubi, The Criterion Channel, PlutoTV, and more. You can sync up the commentary below and watch along with the Everything Action crew.

We want to hear your comments and feedback. Send them all to [email protected].