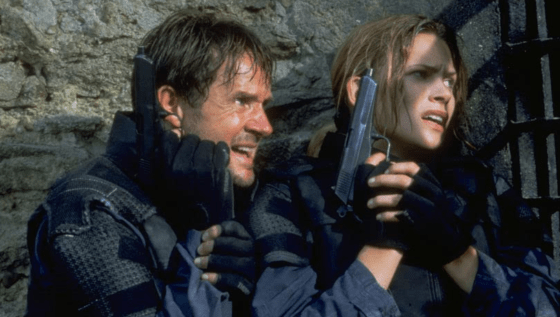 The late Albert Pyun contributed many awesomely over-the-top action movies over his directing career, like Cyborg, Nemesis, Captain America, and Dollman.  One of his more deep-cut movies is 1996’s Adrenalin: Fear the Rush, starring genre favorites Christopher Lambert and Natasha Henstridge.  The duo are cops in the far-off future of 2007, where Eastern Europe has collapsed into anarchy and a deadly virus is sweeping the globe.  The virus reaches the US via Boston and the city is quarantined and locked down from any movement, except via special government badges.  A strange humanoid creature begins terrorizing and killing within the quarantine zone and Lambert and Henstridge are sent in to try and stop it.  Dimension Pictures heavily re-edited and reshot the movie from Pyun’s original version, which he had originally hoped would have more of a found footage/news report style.  Pyun shot the movie in Bratislava, Slovakia, a location he returned to several times after first working there for Captain America for movies like Omega Doom, Crazy Six, and Urban Menace.  You can watch all of Adrenalin: Fear the Rush below thanks to YouTube.