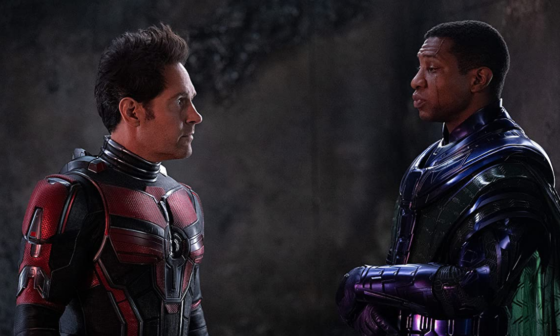 Phase 5 of the MCU begins in February as Ant-Man (Paul Rudd) and The Wasp (Evangeline Lilly) face the new universe-spanning threat, Kang the Conqueror (Jonathan Majors) in Ant-Man and The Wasp: Quantumania.  When an experiment by Scott Lang’s daughter Cassie (Kathryn Newton) sends Scott, Hope Van Dyne, Cassie, Hank Pym (Michael Douglas), and Janet Van Dyne (Michelle Pfeiffer) into the Quantum Realm, Scott meets Kang, who offers up the enticing deal of altering time so that Scott can regain the lost years he missed with Cassie while Scott was trapped in the Quantum Realm previously when Thanos snapped away half the universe.  Kang wants something in return but it seems like whatever he’s requesting will allow him to potentially begin conquering the multiverse.  David Dastmalchian, William Jackson Harper, Katy O’Brian, and Bill Murray co-star and Peyton Reed is back for the third time to direct.  Corey Stoll is also back to play MODOK, who is making his MCU debut. Ant-Man and The Wasp: Quantumania opens on February 17th and you can check out the new trailer below.

Enter the Quantum Realm in February with Ant-Man and The Wasp: Quantumania (Trailer)