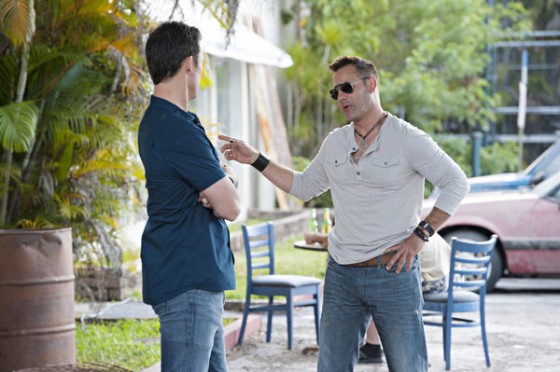 Michael is back in the DR (Dominican Republic) this week and learns that Burke’s plans may be far more complicated than the CIA realized.

After taking out Dexter Gamble last week, Michael heads back undercover with Burke and learns that Burke needs a heavy duty truck stolen from a heavily guarded complex.  Michael gives him some backup when Burke meets with one of the guys he hired to steal the truck but the guy attempts to blackmail them for more money, which Burke answers with a knife to the gut.  Michael says he has two guys in Miami who could do the job and Sam and Jesse are soon on the way down in a dark CIA flight.

The actual heist of the truck is a typical Burn Notice plan, where the guys gauge the alarm of the security fence and cut it at the right moment to allow Michael to enter the complex and stealth his way to the truck.  Sam is covering him with a sniper rifle and things take a slightly dark turn when Sam is forced to kill one of the guards, who discovers Michael while taking a smoke break.  Michael manages to get the truck and he and Burke load up the computer equipment they stole in the premiere to offer to local kingpin, Rafael Serrano.  At the meet, Burke stuns everyone by killing Serrano’s guards and taking him hostage, claiming the “people he works for” want to question him.  This is news to Michael and the CIA, who believe Burke is the top dog of his terror network.  There’s a tense standoff when a chopper arrives to pick up Burke and Michael and he sees all the CIA snipers scattered around the warehouse they are in.  Michael manages to get Sam to shoot at him (as the CIA is listening in), to show that they are not with him and Burke believes they are Serrano’s men and the CIA pulls out to allow Burke and Michael to escape.

Back in Miami, there is a B plot where Nate’s annoying ghost keeps haunting the show when his old bookie arrives to extort money from Maddie.  She asks Fi for help and all they do is blow up a wall to get his safe and then blackmail him into submission.  The combination of an annoyingly emotional Maddie yelling about what kind of man Nate would have probably sunk the episode if the main story in the DR wasn’t as solid as it was.  Sam was in his 1 or 2 episode a year “serious mode”, which is always a little bit of a bummer but there was enough action and twists that it was a pretty good episode overall.

When You’re A Spy: Brother in Arms

When You’re A Spy: New Deal