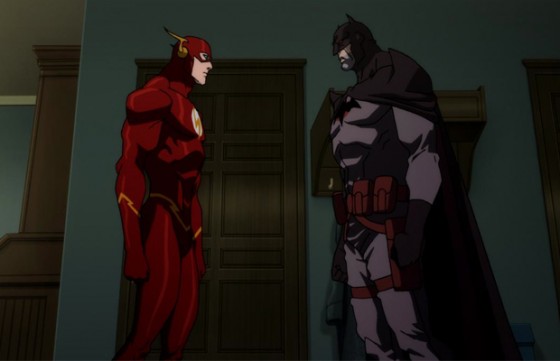 As far behind as DC may be in the live action blockbuster race, they are still absolutely killing it on DVD with their animated movies and The Flashpoint Paradox is the latest and greatest entry in their catalog.

Based on the Flashpoint storyline that launched the New 52, The Flashpoint Paradox kicks off with The Flash defeating his assembled rogues with the help of the Justice League but it may have all been a ruse by Professor Zoom aka The Reverse Flash as Barry Allen wakes up in a horrifying alternate universe where Aquaman and Wonder Woman are waging war across Europe that will cause World War III if unchecked.  The Flash realizes Zoom must have changed something in the past and has to figure out a way to regain his powers and go back in time to fix things.  The alternate universe that is created in this movie is incredible, with little details that could probably merit their own movie if given the chance.  The movie is jam packed with DC heroes and villains, from heavy hitters like Lex Luthor and Green Lantern to obscure characters like Grifter and Etrigan the Demon.  One of the best parts of the movie is getting reintroduced to characters and seeing the differences from the normal DC universe.

The voice cast is pretty fantastic across the board, making it seem like The Dark Knight Returns may have been a fluke in that department.  Justin Chambers of Grey’s Anatomy plays Barry Allen and has a great blend of seriousness and cockiness.  After seeing him in HG Wells’ War of the World’s recently, it’s kind of incredible how great C. Thomas Howell is as Professor Zoom.  He is legitimately threatening and nihilistic, not caring what happens to him as long as The Flash suffers horribly.  DC Animated regulars Nathan Fillion and Kevin Conroy reprise their roles as Green Lantern and Batman respectively and are as great as they normally are.  Rounding out the cast is Kevin McKidd as Thomas Wayne/Batman, who is also from Grey’s Anatomy but also voiced Soap McTavish in the Call of Duty series.  Thomas Wayne’s Batman is definitely the stand out character of the movie, an alcoholic, ruthless Caped Crusader who is more like The Punisher in his use of guns and no qualms about killing.  Also, Ron Perlman is Deathstroke, so bonus.  Alternate Superman is probably the only character who gets short changed, with Tim Daly’s son Sam voicing him.

The main plot about a war between Aquaman and Wonder Woman lends itself to some fantastic action sequences as you get to see various groups trying, and failing to stop them, including the aforementioned Deathstroke leading a team that includes Lex Luthor and Clayface against Aquaman’s secret weapon.  Right from the start, there’s the great sequence where the Justice League has to stop Flash’s rogues at the Flash Museum in Central City and defuse bombs that Zoom put on other villains and it’s fun to see how everyone defuses them differently, from Cyborg and Batman carefully defusing them to Superman just cupping it between his hands until it blows up.  The level of violence is upped to an even greater level than it was in The Dark Knight Returns or Superman: Unbound.  Possibly because it’s an alternate universe, the movie has no qualms about brutally killing off characters, usually with some sort of Amazonian arrow or Atlantean laser beam to the head or chest.  I don’t believe it’s the same team but the animation style is very reminiscent of GI Joe: Resolute, which also didn’t shy away from violence.

The Flashpoint Paradox is a great addition to the DC Animated catalog and gives a fresh and unique take on the universe.  The more of a DC fan you are, the more you’ll get out of it but it’s approachable even for casual DC fans and pushes the movies even more in the direction of appealing to older fans.  If you liked the previous Justice League movies, you’ll definitely enjoy this one.