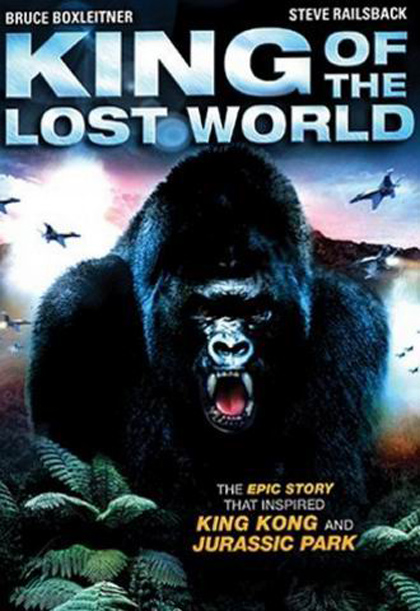 Capitalizing on both Lost and Peter Jackson’s King Kong, King of the Lost World sends a group of plane crash survivors into the dangerous jungles of a mysterious land to try and find some way to get rescued.

Wait, Bruce Boxleitner is in this?  Yes, Tron himself, Bruce Boxleitner is the recognizable name and face that the Asylum drafted for this movie.  He plays Lt. Challenger, an Air Force officer who is sent to the mysterious land to find a nuclear device that went missing.  It’s never explained why A) he was on a commerical airliner and B) how he was going to get to this mysterious Lost World if the plane didn’t crash on it.

Is there anyone else recognizable in this?  Not really, if you watched War of the Worlds you may recognize Rhett Giles, who was the Australian priest in that movie, and is John Roxton in this movie, vaguely set up as an “adventurer”

Wait, Challenger, Roxton, aren’t those characters from Sir Arthur Conan Doyle’s “The Lost World”?  Yes, but that and the vague setting of weird, prehistoric jungle are the only things the movie takes from the novel, even though it boldly claims on the DVD cover that it’s “The Epic Story that inspired Jurassic Park and King Kong”.

So if it’s not based on The Lost World like it claims in it’s title, what is it based on/ripping off?  The basic plot of the movie is pretty much lifted from the first two episodes of Lost (which was halfway through it’s second season when this movie came out).  The survivors crash on the beach, some of them decide to go find the cockpit and get a distress signal sent out and then weird things start happening.  Just replace smoke monsters with a coked out King Kong knock off, giant spiders, dragons and the whitest native tribe in movie history.

How did the survivors end up with a group of  Abercrombie & Fitch employees?  They were trekking through the jungle and discovering other planes and a jet fighter.   The “natives” find the survivors left on the beach, brainwash the women with the same weird blood juice that the Thuggee used in Temple of Doom and then captured our group of survivors later on, intending to brainwash the girls and sacrifice the men.  They also just let a crazy dude run around in the caves below collecting radio and electronic parts.  It seems like the “natives” are just other crash survivors who went nuts.

OK, but how does King Kong fit into this? Hey, careful, you want to get us sued?  It’s not King Kong it’s “him” or some variation, the “natives” never call him by name and he only shows up briefly in the beginning to kill a flight attendant who ended up in a tree and then shows up for the last 10-15 minutes in a batshit insane ending that is as terrible as it is hilarious.

Wow, is all the CG that hilariously awful? Yeah, what do you expect, it’s an Asylum movie.  Check out the giant spiders:

And here’s the “Dragons”: 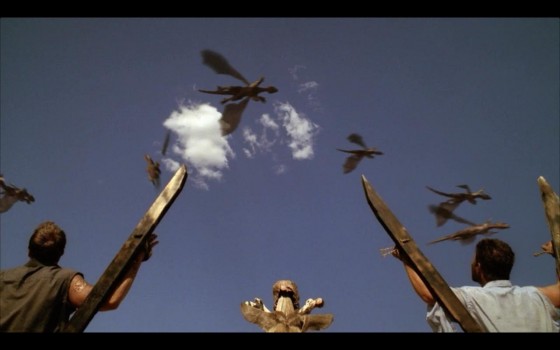 If the special effects are that bad, I can’t imagine how bad the acting is. Yeah it’s pretty terrible, although Bruce Boxleitner is kind of fun as he growls out his lines and acts super shady.  The highlight for him is probably getting into the most random and awkward martial arts fight with one of the native women. There’s also tons of great, stupid lines like Natalie, the dumb, blonde flight attendant thinking that a fighter jet is the cockpit of their plane (“Is that our plane? *everyone looks at her in stunned silence*)

What’s the most ridiculous moment? Probably the ending, it has Not King Kong fighting dragons and then jets, the aforementioned Bruce vs Native Girl fight and then our other hero, Ed Malone, detonating the nuke that Bruce was trying to find.  The spider moment is a close second (and is definitely the goriest moment of the movie) and there’s also the death of Roxton, which is actually kind of surprising but happens for the absolute dumbest reason, as Roxton goes to try and get “Serious Photojournalist” Rita her camera back and is stabbed by a giant scorpion.  He has this great annoyed look on his face when she starts whining about her camera.

Is it worth watching? If you’re a fan of Bruce Boxleitner, maybe? It’s definitely a lot more fun than War of the Worlds and is more in line with what we expect from the Asylum, although it still doesn’t hit the level of stupid, over the top gore of the later movies but does drop War of the Worlds long stretches of dramatic acting in favor of just killing the survivors in various ways.  You can tell that the Asylum realized they are supposed to be making schlock instead of actual, dramatic movies.

Next Time: A zombie curse unleashes a horde of venomous snakes on a train in the appropriately titled “Snakes on a Train”