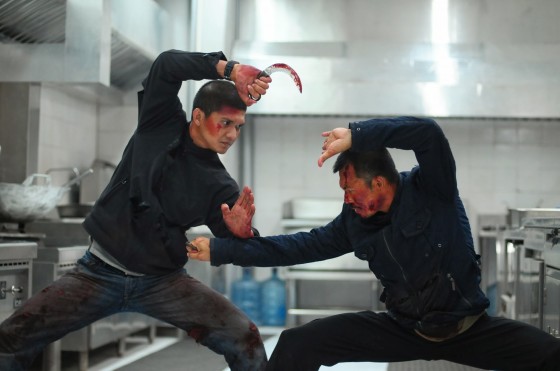 2012 saw the release of two similar, equally awesome action movies set in a criminal run apartment complex, Dredd and The Raid: Redemption.  While we’re still hoping and praying for a Dredd sequel, The Raid has gotten a sequel that expands the world, the running time and, most importantly, the violence to ridiculous levels.

Picking up a short time after The Raid, rookie supercop Rama is recruited for an undercover assignment to get close to and ultimately take down the local crime family.  There’s also a corrupt cop who needs to be taken down as well.  While the setup of the first movie was only the first 10 minutes or so of The Raid, The Raid 2 dives deep into the plot but it’s not really anything that hasn’t been seen before in other undercover cop movies like, say, The Departed, and it certainly doesn’t seem to necessitate the 2 1/2 hour run time.  It is much more enjoyable to watch than the other recent 2 hour+ beast, Transformers: Age of Extinction, but pretty much anything would be more enjoyable than that monster.  Rama is also strangely absent for large chunks of the movie, with it instead focusing on crime boss Bangun, his son Uco and a young up and coming crime boss, Bejo.

Plot isn’t really what you are coming to The Raid movies for though and as far as the action, it is amazing.  If you are at all squeamish, The Raid movies are probably not for you as director Gareth Evans does not hold back on anything.  There’s the usual gun and knife play you would expect but the big thing for The Raid 2 is blunt object kills.  There is a pair of assassins named Hammer Girl and Baseball Bat Man who kill people with their titular weapon and it never stops being brutal whenever they attack someone.  There are incredible set pieces in The Raid 2, like a brutal prison riot in an outdoor area that has turned into a mud pit and a car chase that is also a fight scene and a shootout at the same time.  Iko Uwais’ pencak silat skills are still just as stunning as the first film.  He’s so fast that your barely can barely keep up with his hits and the final fight between him and a fellow silat fighter is one of the best fights of the year, if not of all time.

I think I might prefer the first Raid just slightly over 2 because of the first film’s brutal efficency but The Raid 2 is still one of the best action movies of the year and a must see for martial arts fans in particular but action fans in general.

Action Hero of the Week: Rama