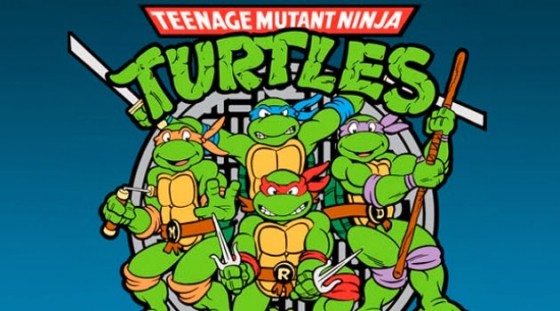 Did I Know Anything Going in?: Through pop culture osmosis and being obsessed with the toys as a kid, I knew all the characters and I think I had some of the VHS tapes of the show but funnily enough, I don’t actually remember watching the show all the time.  I don’t know what network it was on or when it aired but it was so all encompassing for kids in the late 80’s and early 90’s that even if you didn’t watch the show, you knew everything about it.

This first episode of the cartoon sets up the basic premise and sends the Turtles into their first battle against the Foot.  Things actually start out similar to the first movie, albeit in a much more wacky manner, as April O’Neil reports on a crime wave hitting NYC where high tech equipment is being stolen from various labs around the city and ninjas seem to be the main culprit because a bizarre scientist/expert walks into an active crime scene and tells April it was ninjas.  April’s nosiness draws the attention of Shredder and he sends a gang of punks, led by the still human Bebop and Rocksteady, to intimidate her but she flees into the sewers and is rescued by the Turtles.  April’s character fluctuates wildly in this episode and, I’m assuming, the whole show.  One minute she’s super tough and competent and the next she’s fainting or getting kidnapped.  She’s also kind of a bitch to the turtles when she first meets them as she’s super annoyed by their questions about the surface world, which they’ve never been to until now.  There is a pretty funny joke though during their surface excursion where April keeps mistaking which turtle is which and they constantly correct her.  This episode also kicks off the running joke of the Turtles horrifically terrible taste in pizza, with pepperoni/ice cream, sashimi and jelly bean/sausage being some of the pizzas the Turtles devour in the episode.

The Turtles themselves are still pretty fun after all these years, although they aren’t fully configured yet, with the only exception of living snark machine Raphael, who literally has a comeback/sly remark for everything that is said (a fact that was hilariously taken to the extreme in the movie Turtles Forever).  The origin of the Turtles is also completely changed from almost every other incarnation of the Turtles, with Splinter being Hamato Yoshi and being betrayed by Oroku Saki and banished to the sewers of America, where the turtles are accidentally dumped onto his head one day.  Mysterious ooze flows into their home one day and the turtles mutate into human like creatures, because the last creature they touched was Yoshi, while Yoshi transforms into a rat for the same reasons.

The Turtles and April eventually find the source of the Foot robots in a section of NYC where everything is literally ninja themed (Ninja Pizza, Ninja Video, Ninja Laundromat, etc)  and, after a scrap on the roof, Shredder forces his troops to retreat to the Technodrome and floods the building, which April and the Turtles just barely escape.  (There’s a hilarious bit where Shredder declares that the Turtles cannot find his Technodrome and then he literally announces it’s existence over the building’s loudspeakers)  The first five episodes form the movie “Heroes in a Half Shell” and this episode leaves things on somewhat of a cliffhanger as the Turtles are now setting out to find the Foot and figure out why they are stealing all this high tech equipment.

With the addition of almost 20 years of hindsight, the 1987 cartoon of TMNT is definitely one of the weaker incarnations of the Turtles compared to the new IDW comic, the first movie and the original black white comics.  It’s still goofy fun, both intentionally and unintentionally, but it was definitely best through the undiscerning eyes of kids.

EA Commentary: TMNT Coming Out of Their Shells