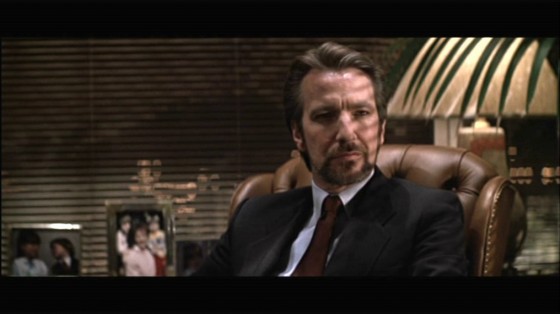 We’re still reeling from the death of David Bowie and fate has dealt another horrible blow as the legendary actor Alan Rickman has also passed away from cancer at age 69.

Right out of the gate, Rickman established himself as one cinema’s greatest villain actors with the iconic, and arguably never topped, Hans Gruber from Die Hard, which was his first major role after some smaller TV roles.

Rickman followed up Die Hard with other incredible villain roles in movies like Quigley Down Under:

and Robin Hood: Prince of Thieves:

The amazing thing about Alan Rickman though was that the same calm, smooth delivery that he used to play great villains, he also used equally as well in comedies like Dogma and Galaxy Quest.

Rickman was also in movies like Sweeney Todd (where we got a taste of Alan Rickman singing), Alice in Wonderland, Perfume: The Story of a Murderer, The Butler, Bottle Shock, Michael Collins and Sense and Sensibility.  His last performance will be reprising his role as the Blue Caterpillar in this year’s Alice Through the Looking Glass, maybe not the best way for a such a legend to go out but even if the movie was not great, Alan Rickman always was and he’s going to be incredibly missed.