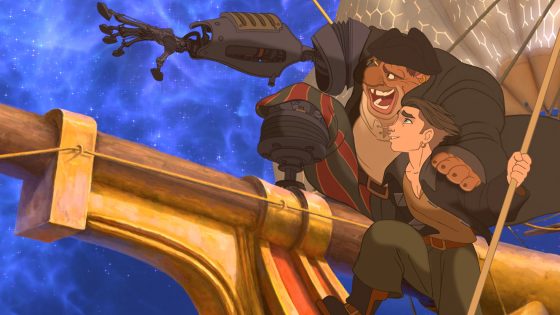 During their early 2000’s slump, Disney Animation was trying a bunch of different things that weren’t the Broadway inspired musicals of the second Golden Age and one of these was 2002’s Treasure Planet.  Putting a sci-fi spin on Treasure Island, the movie featured Joseph Gordon-Levitt as Jim Hawkins, who joins an eclectic crew on a quest to find the legendary titular planet including the devious John Silver (Brian Murray).  Featuring a mix of 2D and 3D animation, the movie was much more action/adventure oriented than prior Disney films and the only songs featured in the movie were from Goo Goo Dolls frontman Johnny Rzeznik, slightly similar to what Fox Animation did with Titan AE by hiring the band Lit.  Rzeznik contributed two songs but the main was “I’m Still Here (Jim’s Theme)” which became a moderate solo hit, peaking at #16 on the Hot 100.  You can check out the music video and the actual section of the movie that uses the song below.