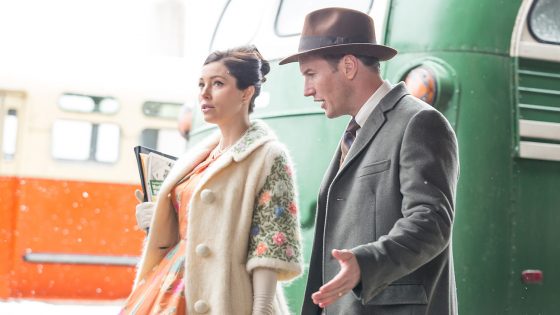 We’re big fans of Patrick Wilson here at Everything Action because of, if nothing else, his willingness to jump between genres like horror with the Insidious and Conjuring movies, action with The A-Team and Stretch and coming up in December, he’ll be starring in the crime drama genre with A Kind of Murder.  Wilson plays Walter Stackhouse, a successful architect in the 60’s in a somewhat unhappy marriage who has an affair with a woman, Ellie (Haley Bennett), which doesn’t work out great when his wife Clara (Jessica Biel) is murdered and he’s the prime suspect.  The era, adultry and unhappy marriages brings to mind Mad Men and the comparison is helped by Pete Campbell himself, Vincent Kartheiser, being the main detective on Clara’s case.  TV director Andy Goddard, who directed episodes of Daredevil, Downton Abbey, Outcasts and Law & Order UK directs and it’s out in theaters, iTunes and On Demand on December 16th, check out the trailer below.