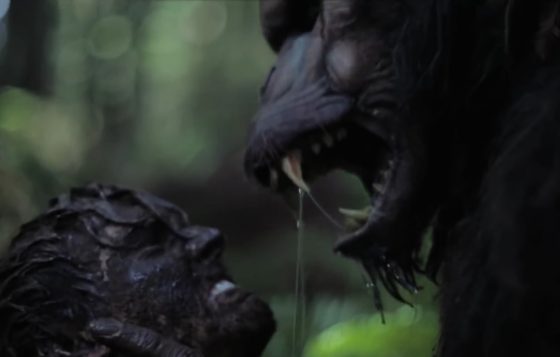 Despite decades of interest and sightings, Bigfoot and other ape monsters have not really had a chance to shine in movies.  Bobcat Goldthwait brought us Willow Creek in recent years but most attempts have been terrible SyFy original movies or MST3K fodder like Boggy Creek.  Special FX artist Patrick Magee is representing the underrepresented cryptid in an upcoming horror movie called Primal Rage: The Legend of the Oh-Man.  A newly reunited couple are driving through the Pacific Northwest when they get caught up in a hunt for a mysterious creature that is killing locals and they find out that the Oh-Man is much more real and deadly than they realized.  Oh-Man looks like he’s a Bigfoot Rambo in this movie, wielding a bow and using knives in addition to his claws and making some sort of primitive armor and cave decor.  The movie doesn’t have a solid release date yet but you can check out the trailer below.