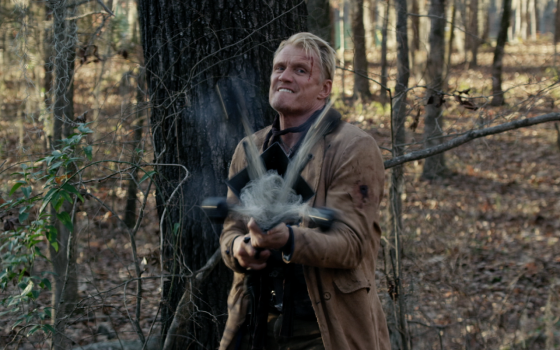 Unlike contemporaries like Steven Seagal, who seems to get lazier and lazier with each movie, Dolph Lundgren has only gotten better, with great supporting work in The Expendables movies, a great guest starring role currently on Arrow, the wonderfully bizarre and brutal Universal Solider sequels and more.  Don’t Kill It is his latest effort where he plays demon hunter Jebediah Woodley and it’s a solid, fun dive into horror/comedy, but it never quite figures out what it wants to be.

The basic premise of Don’t Kill It is simple but brutally efficient; there is a demon that is unleashed that possesses people but, if you kill the possessed person, the demon jumps into you.  Jebediah has been hunting this particular demon for years since his father sacrificed himself to stop it and he picks up it’s trail again as it arrives in a small Mississippi town.  An FBI agent, Evelyn Pierce (Kristina Klebe), also arrives in town to investigate the murders the demon has been causing and she also grew up in the town and has some history there.  The main issue with with Don’t Kill It is that, to me, it never really settled into either being a straight horror movie or a horror comedy.  It seems like it’s falling on the Evil Dead/horror comedy side but the opening sequence is played straight and disturbing as a pair of fathers murder their entire families but later there’s a setpiece bit of mayhem at a town hall meeting that is the exact level of over the top insanity that the Evil Dead series specializes in and is hilarious.  Dolph is definitely playing things lighter, adopting a Southern accent that seems to come and go and his character seems like he could easily show up in the Ash vs Evil Dead universe.  The rest of the cast is playing things fairly straight though, especially Kristina Klebe, and there’s also a half-assed sideplot about why the demon seems particularly interested in her that doesn’t really build to anything spectacular.  The simplicity of the rules of the demon though really works in the movie’s favor and it also forces a slightly more creative way to stop it than your typical demon hunting movie.

One place where Don’t Kill It shines is in it’s use of old school practical effects.  There seems to only be a few instances of CG gore being used but for the most part, it has old school blood and guts which will probably be appreciated by an old school horror fans.  Only the aforementioned town hall sequence really goes all the way with those effects though but they are solid throughout.  There’s also a really fun but short montage where Dolph is describing how demons work to Agent Pierce and the town sheriff that features a wide variety of different styles and seems to be paying homage to various demon/exorcism movies that is a treat for horror fans as well.

Don’t Kill It is a fun, solid horror movie but it never quite gels into either being a full on horror movie like the opening seems to setup or a horror comedy in the vein of Evil Dead, which it seems to really be trying to do.  Dolph is great and funny as always and the central premise is fantastic but there is definitely potential for it to have gone just slightly more in either direction to really get to the next level.