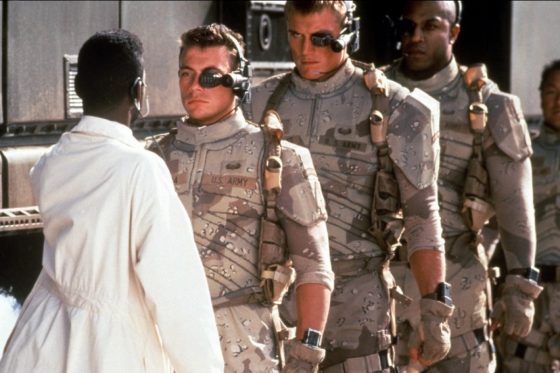 Previously we saw Megadeth’s contribution to Universal Soldier: The Return’s soundtrack with “Crush Em” but for the first entry in the series, Ice-T and Body Count delivered “Body Count’s in the House”.  Formed in 1990 by Ice-T and lead guitarist Ernie C based on their shared love of heavy metal, the group fused Ice-T’s lyrics with Ernie’s shredding on tracks like their extremely controversial song “Cop Killer”, which Ice-T decided to remove from the group’s debut album because the controversy was eclipsing their other songs and the group as a whole.  “Body Count’s in the House” arrived in 1992 and was featured over the credits of Universal Soldier.  The music video features the band performing on-stage with tons of crazed metal fans thrashing in the mosh pit and there are tons of clips from the movie interspersed throughout, possibly the most we’ve ever seen.  Body Count is still going strong today and apparently are going to be hitting the studio soon to start production on their seventh album, Carnivore.  Check out the “Body Count’s in the House” video below.