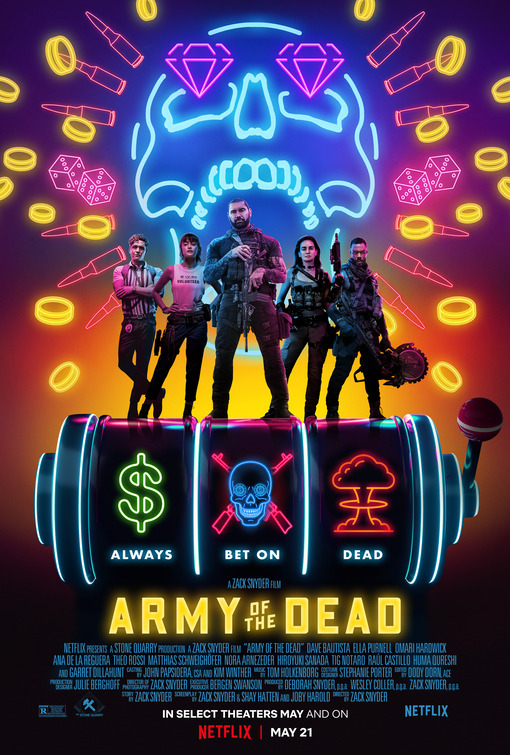 Zack Snyder has already had a huge year with the success of his version of Justice League on HBO Max but he’s heading to a competing streaming service in May for Netflix’s Army of the Dead.  Dave Bautista leads a ragtag ensemble as former soldier Scott Ward, who is approached by shady casino boss Bly Tanaka (Hiroyuki Sanada) to plan a heist into Las Vegas.  The city is quarantined and walled off from the world following a zombie outbreak and the military is planning on nuking the city in 32 hours.  If Ward and his team can get in and break into a vault under the strip before the nuke goes off, they can walk away with $200 million.  The interesting detail in this new full trailer is the fact that zombies are smarter than normal, able to fight, strategize and have some sort of hierarchal structure, so it’s a bit different from other zombie movies, like Snyder’s own Dawn of the Dead remake.  Ella Purnell, Omari Hardwick, Ana de la Reguera, Theo Rossi, Matthias Schweighöfer, Nora Arnezeder, Hiroyuki Sanada, Tig Notaro, Raúl Castillo, Huma Qureshi, Samantha Win, Michael Cassidy, Richard Cetrone, and Garret Dillahunt co-star and the movie is out in select theaters and Netflix streaming on May 21st. Check out the trailer below.

Review: Army of the Dead