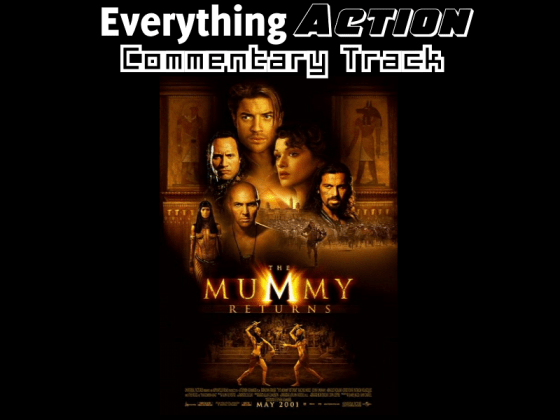 For this month’s Everything Action Commentary, Zach and Chris celebrated the 20th anniversary of The Mummy Returns by watching the movie on HBO Max.  Originally coming out on May 4th, 2001, The Mummy Returns took everything people loved from the first Mummy movie and just piled on more of it, more villains, more mummies, bigger spectacle, and questionable past lives for the heroes.  Set around 10 years or so after the first movie, Rick (Brendan Fraser) and Evie (Rachel Weisz) are happily married with an 8-year-old son named Alex (Freddie Boath) and they have continued their globe-trotting archaeological adventures.  On one such adventure, they discover the Bracelet of Anubis, which can reveal the location of Ahm Shere, the home of the legendary Scorpion King (Dwayne Johnson).  A cult that follows Imhotep (Arnold Vosloo) attempts to steal the bracelet but instead kidnaps Alex, as they have resurrected Imhotep and want to help him defeat the Scorpion King, which would give Imhotep the Army of Anubis and make him an unstoppable force to take over the world.  While watching the movie, the guys discuss Imhotep’s force powers, good and bad CGI, Egyptian ninjas, the huge array of villains, and more.  The movie is available to stream on HBO Max or you could rent or buy it elsewhere or sync up a DVD or Blu-Ray and watch along with the Everything Action Crew.

Musical Montage: Live “Forever May Not Be Long Enough”