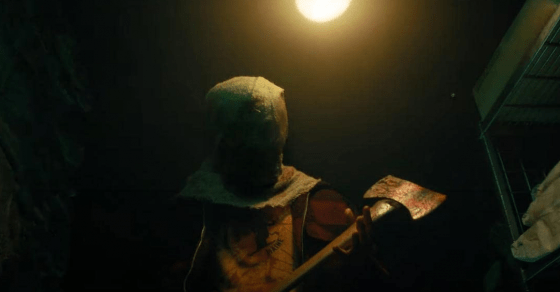 After last week’s excellent opening chapter, Fear Street returned again this past weekend with the second chapter of the trilogy, set in 1978 at the ill-fated Camp Nightwing.

Picking up where 1994 left off, Deena (Kiana Madiera) and Josh (Benjamin Flores Jr) seek the help of “C. Berman” (Gillian Jacobs), who seems like the only other person who survived the same situation that Sam (Olivia Scott Welch) currently finds herself in.  Berman tells the siblings the story of the Camp Nightwing Massacre that happened in July 1978 when she was at the camp with her sister.  Sadie Sink and Emily Rudd play sisters Ziggy and Cindy Berman, with Ziggy being a troublemaker who firmly believes in the curse of Shadyside and that everyone who lives there is screwed while Cindy is determined to follow the roles and act more like a Sunnyvaler in the hopes that she can eventually leave town.  When the camp nurse, Mary Lane (Jordana Spiro) attacks Cindy’s boyfriend Tommy (McCabe Syle) claiming he is going to become possessed by the witch Sarah Fier, Cindy, Tommy and Cindy’s former friends Alice (Ryan Simpkins) and Arnie (Sam Brooks) try to figure out why she snapped and use Nurse Lane’s journal to uncover the secret lair of Sarah Fier.  Nurse Lane’s prediction comes true when Tommy becomes possessed and starts to go on a rampage at the camp, killing campers brutally with an axe.  Just like how Part One did a great job paying homage to 90s slashers like Scream, Part Two does a fantastic job capturing the vibe of Friday the 13th with the 70s setting and the copious amounts of teen sex and drug use.  Part Two feels a bit more straightforward than Part One, as the characters of 1978 are more concerned with surviving and don’t come up any elaborate plans like the 1994 crew and Tommy is mostly the only killer until a brief bit at the end.  The movie does a great job of building onto the mythology set up in 1994 and adds more to the legend of Sarah Fier, showing her lair, where the undead killer originate and offering a possible way to stop her and end the curse.  Tommy was also one of the killers in 1994 but now we get his entire origin story and there’s also backstory for characters like the still mysterious Sheriff Goode, who was a counselor at Camp Nightwing and grows a romantic interest in Ziggy.  Like 1994, there aren’t any particularly unique kills but all of the kills are effectively brutal and bloody and evokes the style of Jason Voorhees, especially in the earlier entries in the Friday the 13th series.

Much like Part One, the cast of Part Two is overall very strong with Sadie Sink and Emily Rudd carrying the bulk of the story and emotional depth.  While Part One had an underlying plot about repairing a romantic relationship between Deena and Sam, Part Two focuses on the sister relationship between Ziggy and Cindy, as the two grew apart after their father left them and their mother became an alchololic.  The fact that they are separated for most of the movies makes that aspect not as strong as Part One, where Sam and Deena were together the entire movie, but it’s still effective and well done. Hopefully we get some more Gillian Jacobs as we only get a bit of her bookmarking the 1978 storyline but she has a fun, paranoid energy and there’s still lots of questions about her situation (she has counted every single day since 1978 and has a room full of clocks on different alarms for different tasks).  The movie also ends on another great cliffhanger that leads into this week’s 1666 finale and hopefully the trilogy can stick the landing and wrap things up on a high note.

The Fear Street trilogy continues to be a higlight of the summer and if you’re a horror fan, you’re sure to get a kick out of Part Two’s fantastic ode to Friday the 13th.  The characters are still strong and interesting and the violence is still effectively brutal and gory along with some excellent mythology building for the overarching storyline.  I can’t wait to check out the final chapter, 1666, this coming weekend and see how this story wraps up.