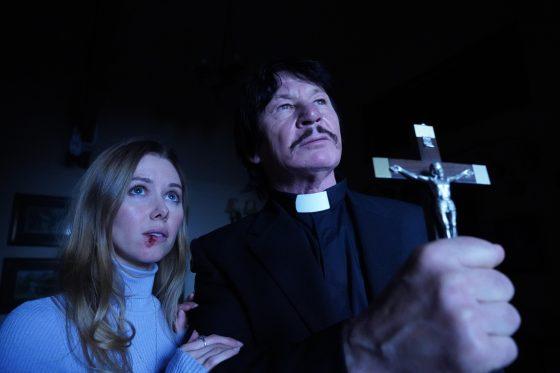 The last time we saw Robert Bronzi, he was escaping from Death Block 13 and now he’s a gun-toting priest trying to stop a demonic possession in Exorcist Vengeance.

Bronzi stars as Father Joszef, a priest who comes from the streets and is tasked to travel to the home of a wealthy family and investigate whether they are the victims of demonic possession.  The family patriarch killed herself and her housekeeper Magda (Anna Liddell) is showing signs of being possessed.  Joszef arrives and begins to try and perform the rites of exorcism but things get more complicated when members of the family start to get murdered by a hooded figure and Joszef has to figure out if it’s the demon or something else going on.  The movie does have an interesting blending of ideas with traditional demonic possession/exorcism stuff mixed with a bit of whodunnit? mystery that feels like a lite version of Knives Out along with some of the Charles Bronson attitude and inspiration that Bronzi brings.  The murder mystery element is undercut by the fact that the cast is so small, so when 1 or 2 of them get offed, it’s not hard to predict who is actually behind everything.  If there had been more cast members for the family or maybe if the movie was more Bronzi hunting down the demon as it killed people a la the Denzel movie Fallen, it definitely would have made things more interesting.  Bronzi is doing his usual stoic badass thing in Exorcist Vengeance but it definitely seems like this is the most acting he’s been asked to do, with fewer action sequences and more conversations and monologues.  His thick accent makes it a little tricky for some of the more extended dramatic scenes but he’s mostly interesting to watch and it’s fun to sort of get an idea of what a Charles Bronson horror movie could have been like.  The rest of the cast is fine with Simon Furness doing a solid job being an unlikable weasel as Patrick and Stephen Berkhoff chewing scenery in his few scenes as Joszef’s superior, Bishop Canelo.  Sarah Alexandra Marks also does a good job as Rebecca, who becomes Joszef’s assistant in the various exorcisms and his closest ally within the family.

The exorcism sequences are mostly solid throughout Exorcist Vengeance.  Everyone who gets possessed really leans into the snarling, crazed side of it and there’s some good, gross blood oozing out of mouths and distorted demonic insults being spewed.  The fact that Bronzi’s Joszef brings a gun with him along with the usual holy water and bibles seems like a fun, schlocky twist on the genre but it’s not really used that much and it doesn’t turn the movie into a Death Wish style action movie, which is a bit disappointing.  The house where most of the movie takes place is also not very interesting and is just a quaint English country home and, besides a secret passage between some rooms, it doesn’t add much ambiance or personality to the proceedings, even when things get dark and spooky.

If you’re curious what a Charles Bronson starring horror movie might have been like, Exorcist Vengeance is a decent demonic possession movie with the usual stoic badass performance you get from Robert Bronzi.  The possession scenes are nothing special but are solidly done and there are some extra elements, that while not explored to a satisfying degree, do set it apart from other schlocky b horrors out there.  Exorcist Vengeance is out now on Digital and DVD