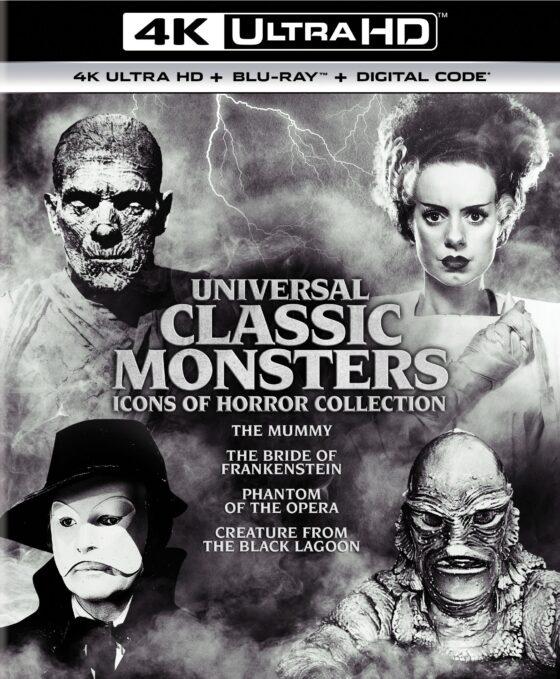 Last October, we got to check out the first Universal Classic Monsters: Icons of Horror collection, which brought Dracula, Frankenstein, The Wolfman, and The Invisible Man to 4K.  Now we have Vol 2, which includes The Mummy, The Bride of Frankenstein, Phantom of the Opera, and Creature from the Black Lagoon.

Much like the first set, the 4K quality on these classic movies is truly stunning.  These movies have never looked better and you can really appreciate things like the creature effects and set designs, especially in movies like Creature from the Black Lagoon and The Mummy, as they are the more intricately designed creatures.  The quality and legacy of these movies are unimpeachable and The Mummy and Creature from the Black Lagoon are two of my all-time favorite movies from the classic Universal Monsters series, with Creature, in particular, being a stunning achievement with the underwater photography and how they were able to create a suit that let stuntman Ricou Browning swim and stalk in the water.  This is probably blasphemous but I’m actually not that big of a fan of The Bride of Frankenstein as I find it a bit meandering and The Bride doesn’t actually get to do anything interesting in the movie.  Her iconic look is probably one of the big reasons she’s remained an icon along with the other monsters of that era.  Boris Karloff is still fantastic as The Monster and he definitely gets a chance to do more acting and show more facets of the character, with lots of humorous bits alongside the sad and scary aspects of The Monster.  Phantom of the Opera, much like The Invisible Man in the first collection, is definitely the outlier and the only movie between both collections so far to be in color.  This is the 1943 version starring Claud Rains, who was also The Invisible Man, and it’s the only classic Universal horror movie to win Oscars, for Art Direction and Cinematography specifically.  I’m not 100% why they included this version and not the 1925 version with Lon Chaney, which was just included on Shudder’s 101 Scariest Movie Moments and, in my opinion, has the more iconic and creepier look for The Phantom.  The only reason I can think of is that the 1925 version is silent and would be less accessible but fans who would be buying this set have probably already seen that version and wouldn’t care.  The 1943 Phantom is stunning visually but it feels more like a showcase for big, showy opera numbers that take advantage of Technicolor and there’s more focus on a wacky love triangle than on the actual Phantom running around sabotaging and killing people.  It’s interesting but if you’ve never seen it like I haven’t, it will probably be the most hit-or-miss movie in this collection.

As far as special features, each movie has at least one commentary with a film historian, including Scott MacQueen on the Bride of Frankenstein and Phantom of the Opera.  The Mummy actually gets two commentaries (probably because it’s celebrating its 90th anniversary this year) and the second one is definitely the highlight as it features special effects legend Rick Baker along with producer Scott Essman, Mel Brooks producer and writer Steve Haberman, actor and archivist Bob Burns and special effects artist Brent Armstrong talking about the behind the scenes of how the creature was made and appreciating the artistry on display.  The Mummy also gets much more special features than the other movies in the collection, including one on artist Jack Pierce.  Each movie also gets a historical/behind-the-scenes feature but, unfortunately, these are definitely from older releases, possibly even going back to DVDs as the quality is noticeably lower grade than the 4K of the films themselves, although I guess this lets you see how improved the quality actually is.  There are still some interesting tidbits in each one but it feels a little cheap to not make some sort of new feature for each of these movies.  There’s also Archives, which is a slideshow of posters and behind-the-scenes photos and trailers for not only the movie included but other movies in that sub-series.  Just like the first collection, there is also a “100 Years of Universal” feature on each disc that goes into the history of Universal Studios, including the backlot, the formation of the studio by Carl Laemmle, and how they restore classics to Blu-ray, and now 4K, quality.  The Universal features are interesting but they aren’t really related specifically to the Universal Monsters, so it feels like an odd addition, like these features were just laying around and they threw them on to fill out the collection.

Universal Classic Monsters: Icons of Horror Collection Vol. 2 is a solid collection of iconic movies and the quality is the best they have ever been seen in and if you need these classics in 4K, this is obviously the collection to get.  The price might be a bit much for some as it’s around $70 for just four movies with not a lot of special features, or at least brand-new features, to check out.  There are definitely other sets out there that are not as high quality but give you more of the Universal Monsters movies at a cheaper price and also collections focusing on specific monsters, so you may want to see if those are more of what you are looking for before investing in this collection.  Universal Classic Monsters: Icons of Horror Collection Vol. 2 is out now.