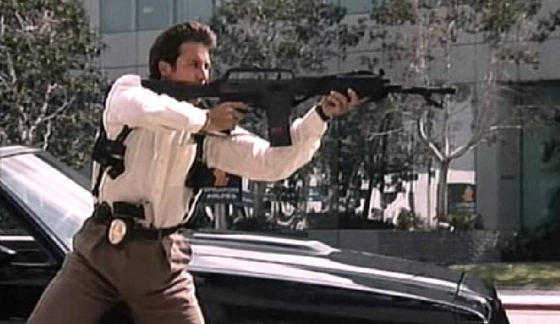 Before Heat, Michael Mann directed the TV movie L.A. Takedown in 1989, which Heat was a remake of.  Always paying special attention to his soundtracks, Mann included Billy Idol’s “L.A. Woman” on the L.A. Takedown soundtrack.  A cover of the song by The Doors, “L.A. Woman” was included on Idol’s Charmed Life album in 1990, which also included his last big hit “Cradle of Love”, featured on the soundtrack for The Adventures of Ford Fairlane. David Fincher directed the “Cradle of Love” video and returned for the “L.A. Woman” video, which doesn’t really feature anything from L.A. Takedown but does feature a lot of Hollywood/Los Angeles imagery, including a woman dressed like Marilyn Monroe in a Christ-like pose on an electrical pole.  “L.A. Woman” hit #52 on the Billboard Hot 100 and #18 on the Mainstream rock charts.  You can check out the video for “L.A. Woman” below.