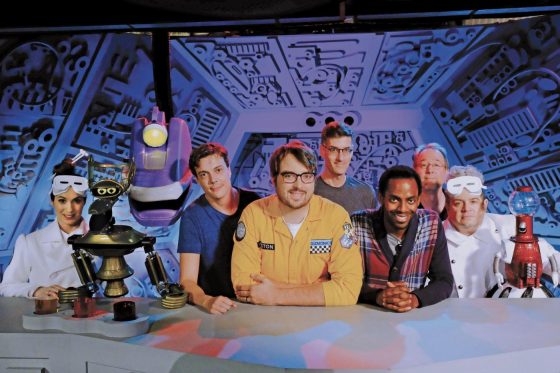 The original “make fun of bad movies” show is back in April with 14 new expiriments being unleashed on Jonah Heston (Jonah Ray) by the new team of “Mads”, Kinga Forester (Felicia Day) and TV’s Son of TV’s Frank (Patton Oswalt) on their moon base.  Baron Vaughn and Hampton Yount are taking over as Tom Servo and Crow respectively and original creator Joel Hodgson is executive producing.  SyFy era crew Bill Corbett, Kevin Murphy and Mary Jo Pehl will be back in guest appearances as well and this new trailer reveals that hilariously terrible monster mash Reptilicus will be one of the movies the new crew will be riffing on.  The original’s cheap but charming feel seems intact but the true test will be in the theater to see if the riffs are as obscure and hilarious as the original runs.  All 14 new episodes will be streaming on April 14th and you can check out the trailer below.

MODOK Hits a Rough Patch on His Hulu Show (Trailer)