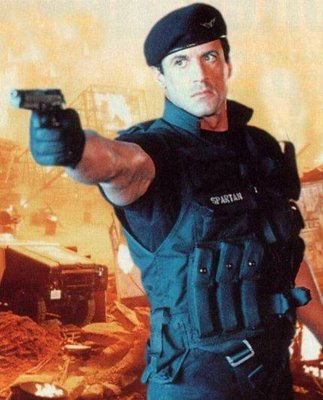 Cops don’t get much renegady then John Spartan.  Nicknamed the Demolition Man for his penchant for causing massive amounts of property damage whenever he arrests a suspect, Spartan attempts to clean up the post apocalyptic Los Angeles of 1996.

Spartan’s main nemesis is the psychotic Simon Phoenix, who controls a section of LA and ultimately holds a bus full of people hostage.  Spartan heads in a single handedly takes down Phoenix and his gang but the building explodes.  Spartan believed that Phoenix lied about having the hostages in the building due to none showing up on the infrared scan of the building, but after the dust settles the bodies of the hostages are found under the building.  Both Phoenix and Spartan are charged and sentenced to CryoPrison where they will be cryogenically frozen for the length of their sentences.

32 years later, Phoenix is up for parole but, of course, escapes using newly discovered combat techniques and proceeds to go on a crime spree across San Angeles, the combined metropolitan area of Los Angeles, San Diego and Santa Barbara, which was formed after a massive earthquake.  A homicide or other major crime hasn’t occured in the city in many years and the police are completely unprepared to do anything.  Veteran cop Zachary Lamb, who was a helicopter pilot in 1996, suggests they thaw out the one man who stopped Phoenix before, John Spartan.  The chief begrudgingly agrees and Spartan is reinstated temporarily and paired up with 20th century fanatic Lenina Huxley.

Spartan believes that Phoenix will look for weapons and then try to rebuild his empire.  Spartan and Huxley head to the San Angeles museum where they find Phoenix in the weapons exhibit.  The two have a shootout in the exhibit and eventually in the museum’s exhibit of old Los Angeles.  Phoenix escapes and almost kills the creator of the new San Angeles society, Dr. Raymond Cocteau.  Spartan intervenes and Phoenix gets away.

Cocteau shows his appreciation to Spartan by treating him to dinner at Taco Bell, the only restaurant to survive the Franchise Wars.  During dinner, Spartan interrupts a raid by a group of underground radicals called “The Scraps” and led by Edgar Friendly.

Spartan believes that the Scraps hideout might be a good place to find Phoenix so he and Huxley head down to investigate.  They find that Friendly just wants to be able to live however he sees fit, which agrees favorably with Spartan.  During their meeting, Phoenix and a newly formed gang attack the Scraps headquarters which leads to another firefight and a chase down the San Angeles freeway.

Spartan and Huxley learn that Phoenix’s rehabilitation consisted of him learning terrorist and combat techniques and that the only person who could have authorized this is Cocteau.  It turns out Cocteau allowed Phoenix to escape in order to have him kill Edgar Friendly.  This plan backfires when Phoenix kills Cocteau and heads to the Cryoprison to unthaw all the prisoners.

Spartan heads in alone to attempt to take down Phoenix once and for all.  Phoenix is in control of a giant robotic lifting arm and captures Spartan in it but Spartan manages to break a cooling pipe and freeze and break one of the fingers.  The two engage in a final fist fight and it looks as if Phoenix will prevail until Spartan sees one of the cryoprison’s man freezing devices, which he breaks on the floor and freezes Phoenix with.  He then kicks off Phoenix’s head and blows up the cryoprison.  Spartan then decides to stay with the San Angeles police and help create a better future with the help of Friendly and Huxley.