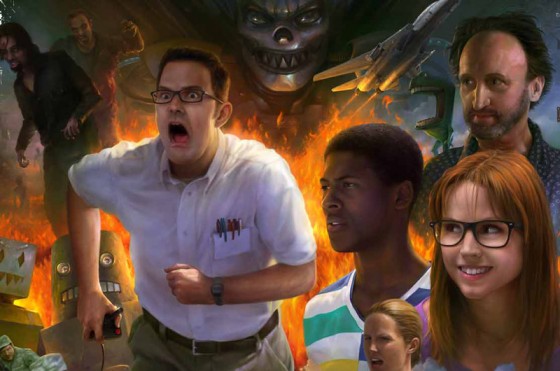 The culmination of years of fantastic and hilariously vulgar retro game reviews, James Rolfe and Cinemassacre have created their first, full length feature based on The Angry Video Game Nerd and pits him against his greatest fear, ET for the Atari 2600.

Expanding the universe of the Nerd (Rolfe) beyond the web series, The Nerd’s popularity catches the attention of evil game company, Cockburn Industries, who are getting ready to release a sequel to the infamous Atari ET game.  Trying to get the Nerd to review it and jack up their sales, marketing rep Mandi (Sarah Glendening) approaches the Nerd’s self appointed “manager”, Cooper (Jeremy Suarez) to do a promotional trip to the fabled burial site of the many unsold ET cartridges.  The Nerd agrees, as he doesn’t believe the games are actually buried there and, thus, will not have to review the games, but when they arrive, a misunderstanding puts them in the sights of accident prone and gung ho Army general, Dark Onward (Stephen Mendel), who believes they are trying to uncover actual Extra Terrestrials.  My main issue with the movie would be that plot gets kind of convoluted toward the end and there’s more focus on AVGN callbacks and homages to things like Godzilla movies and Close Encounters.  All the references and homages are extremely fun but it just feels a bit unfocused compared to the simple road trip premise of the first half as multiple conspiracies, a festival of crazed nerd fans, and alien spaceship parts all get introduced in short succession in the second half of the movie.  I’m sure James and crew were trying to cram in everything they loved into their first movie but it might have been stronger with a bit more focus.  There are tons of fun cameos as well from fellow internet personalities like Nostalgia Critic, Pat the NES Punk, Mike Matei and Kyle Justin and celebs like Lloyd Kaufman and Eddie Pepitone.  Bear McCreary also provided the score, with an epic new version of the AVGN theme as one of the highlights.

Cinemassacre’s love of classic monster movies and sci-fi definitely shows as the movie features tons of classic practical effects like a massive Godzilla/Power Rangers style monster, miniatures exploding, limbs getting blown off, zombies and more.  It’s exactly what you would expect from a big budget version of the more special effects heavy episodes of AVGN.  Overall it looks really great as well and it definitely doesn’t feel like just an expanded episode.  The humor of the Nerd is fully intact as well, as he goes on a number of profanity filled rants and there’s a bunch of great bits of humor as well, like a misunderstanding involving an overheard game of NES Track and Field between the Nerd and Mandi.  The movie also does a great of job of featuring a bunch of the games the Nerd has reviewed over the years, but recreated with new graphics and names so that they are just off enough to avoid licensing issues.

Overall, if you’re a huge fan of The Nerd, you have probably been anticipating and may have already seen the movie but it’s definitely a must watch if you are a fan, as the whole thing just feels like massive fan service to everyone who has supported The Nerd over the years.  If you’re new to The Nerd, I would probably recommend watching a few episodes of the regular series first to see if the humor and style is up your alley, because the movie is definitely an amplified version of everything The Nerd has done.