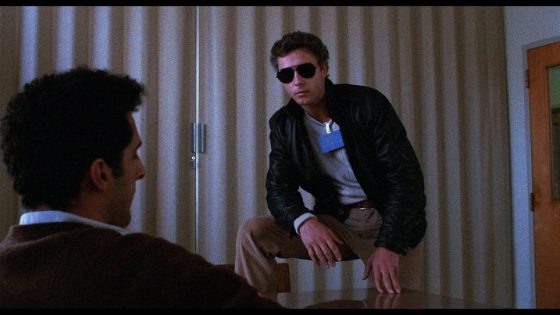 A year before they exploded in 1986 with their biggest hit, “Everybody Have Fun Tonight”, Wang Chung were hired by director William Friedkin to compose the entire soundtrack for his cult action thriller, To Live and Die in LA.  Starring the once and future Gil Grissom, William Petersen as Richard Chance, a Secret Service agent who becomes obsessed with taking down dangerous counterfeiter Rick Masters (Willem Dafoe), who killed Chance’s partner.  Friedkin said that Wang Chung “stands out from the rest of contemporary music … What they finally recorded has not only enhanced the film, it has given it a deeper, more powerful dimension”.  The band wrote most of the songs in a little under two weeks but they didn’t write the title song until they saw a rough cut of the film.  The album hit #85 on the Billboard charts and the title song hit #45 on the Hot 100 as a single.  The official music video is actually a look behind the scenes of the band recording the song, as they watch clips from the movie in the studio, you can check it out below.