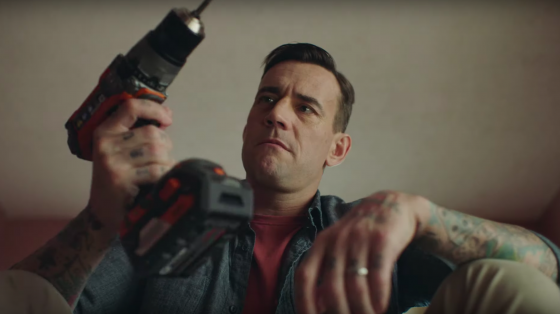 Just in time for Halloween, the new horror movie Girl on the Third Floor arrived last Friday in select theaters and VOD and features the debut dramatic performance from Phil “CM Punk” Brooks.

CM Punk stars as Don Koch, who is working on renovating a rundown home that he and his wife Liz (Trieste Kelly Dunn) bought to try and get a fresh start away from Chicago as they get ready to welcome their baby daughter.  Don discovers more of a mess than he was expecting, with strange goo oozing out of the shower and power outlets, pipes full of black gunk and strange stains on the walls. He also meets some of the locals including Ellie (Karen Woditsch), who is the pastor of the local church across the street, and Sarah (Sarah Brooks), a gorgeous young woman who becomes increasingly sinister as the movie progresses.  The movie does a fantastic job in the first two-thirds of slowly building the mystery and dread of the situation as Don finds new weird problems with the house and his interactions with Sarah become darker and more aggressive. The slow burn does mean there aren’t any really big set pieces until the ending, so that might be slightly disappointing for fans of flashier horror, although there is a messed up ghoul who we discover is hiding around the house and has an affinity for marbles.  The movie does falter a bit with the ending, as it takes a wild swing into insanity, but it generates more confusion than terror because there is not a lot of build-up or backstory up to that point. The movie doesn’t need to lay out every little detail but I would have appreciated slightly more clues and background on the house, which it actually seems to be building up initially as Don finds a dress and a wig in one of the walls of the house or comments from people around town. There’s also a hasty explanation for all the events that occur but it puts the conclusion in a weird limbo where it is not ambiguous enough to be interesting and not explained enough to be satisfying.  The ending doesn’t ruin the entire movie but I felt it was a little lackluster after the great slow-burn buildup of the rest of the movie.

Girl on the Third Floor is a pretty bold first stab at dramatic acting by Punk, as for a majority of the movie it’s a one man show where he is carrying the entire scene and he does a pretty fantastic job.  He’s fun to watch as he works around the house and I got some Bruce Campbell in Evil Dead vibes at times from him, especially when he’s getting blasted in the face by strange goo. He doesn’t really do any heavy-duty monologues or emotional scenes but he is definitely more than capable and I’ll definitely keep an eye out for what he’s doing in the future (he’s in another horror movie called Rabid from the Soska Sisters that has only come out in Europe so far).  Sarah Brooks is solid as well as Sarah and has a great blend of seductive and sinister, and it keeps leaning toward the latter as the movie goes on. Trieste Kelly Dunn is great as well as Liz, who mostly appears Facetiming Don from their current home until she shows up in person in the latter part of the movie. I know her best from Blindspot where she plays Allie Knight and she has the same cool, sensible vibe here that she has there.

Girl on the Third Floor is a solid horror movie that is definitely worth seeing for the debut dramatic performance of Phil “CM Punk” Brooks and it’s a much more interesting debut than just appearing in some terrible action movie or crime thriller.  There’s lots of great, weird stuff throughout and, even though the ending falters in my opinion, if you’re looking for something new and spooky to check out as the Halloween season winds down, check it out on VOD or in theaters if it’s playing near you.