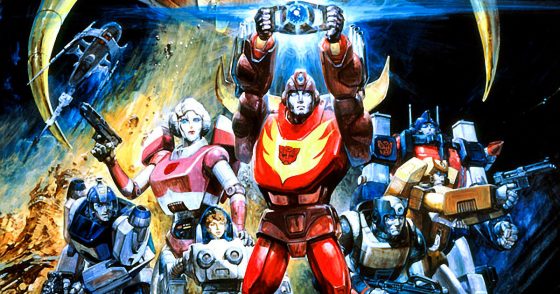 This coming weekend, 1986’s The Transformers: The Movie will celebrate its 35th anniversary and you can watch the entire movie below in the latest Everything Action Theater.  Set in the far-off future of 2005, 20 years after the end of the second season of the 80s cartoon series, the Transformers universe is rocked by the appearance of Unicron, a mechanical planet that devours other planets to sustain himself.  After a brutal battle on Earth, Optimus Prime is killed and Megatron is severely wounded and eventually turned in Galvatron by Unicron.  The remaining Autobots are divided and go on various adventures across the galaxy, ultimately coming back together for the final battle with Unicron before he devours Cybertron.  The movie is famous for its incredible soundtrack, with songs like “The Touch” by Stan Bush, and for scarring a generation of kids with the death of Optimus.  The movie also has much higher animation quality than the TV show and offered some of the most incredible Transformers action up to that point but it was a commercial failure as it came out in a crowded box office environment (it actually opened the same day as Stand by Me and Aliens was most likely still in theaters as well), but it has since become a beloved part of Transformers canon and still comes up in recent projects like Transformers: War for Cybertron on Netflix.  The entire movie is below to watch via YouTube.