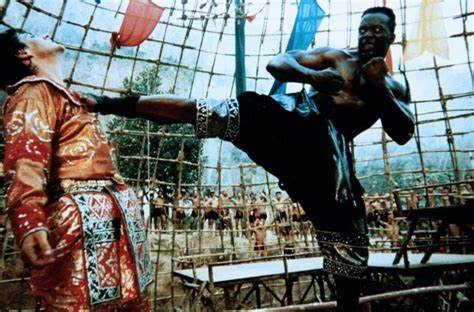 In the wake of Bloodsport, there was seemingly an endless stream of martial arts/tournament movies coming out, one of them being 1990’s The King of the Kickboxers.  Also known as Karate Tiger V or No Retreat, No Surrender 4, The King of the Kickboxers stars the master of Tae Bo himself, Billy Blanks, as the sadistic fighter Khan, who kills the brother of fighter Jake Donohue, which puts Jake on a quest for vengeance.  Loren Avedon plays Jake and he was no stranger to the genre, also appearing in Los Angeles Streetfighter and No Retreat, No Surrender 2 and 3, playing different characters than the one he plays here.  Avedon is a black belt in Taekwando and Hapkido, so he has actual fighting chops to showcase.  While maybe not as influential as movies like Bloodsport and Kickboxer, The King of the Kickboxers does seem to have had some influence in the world of video games, as the Street Fighter character Dee Jay was inspired by Billy Blanks in this movie.  You can watch the entire movie below thanks to YouTube.