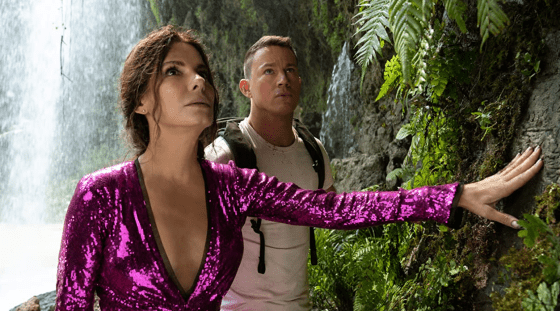 Batman was finally dethroned by the combined power of Sandra Bullock and Channing Tatum as The Lost City took the #1 spot at the box office over the weekend.

The Lost City took in $30.4 million for the weekend domestically and it currently doesn’t have any international numbers.  For Sandra Bullock, it’s just behind the opening of The Proposal back in 2009 and it’s her first theatrical starring role since Ocean’s 8 in 2018 as she’s been starring in Netflix releases like Bird Box and The Unforgivable.  For co-star Channing Tatum, it’s almost identical to the opening of Dear John back in 2010 and it’s about double what his other 2022 movie, Dog, made in its opening weekend, although Dog had a lower budget and is being considered a success as well.

The Batman dropped to 2nd place with $20.4 million, bringing it to $331. 8 million domestic and just shy of $631 million worldwide.  It has passed the domestic gross of Batman v Superman, although it’s still about $242 million short of BvS’s worldwide gross.  The Batman has probably already passed Joker’s domestic gross but it needs another $113 million or so to pass The Dark Knight Rises and it probably doesn’t that much left in the tank, especially with strong competition coming in the next few weeks.

RRR: Rise, Roar, Revolt from India had a strong showing in third place with $9.5 million in 1,200 theaters.  It’s the second-best opening ever for a Bollywood movie in the domestic market behind Baahubali 2: The Conclusion.  There doesn’t seem to be any data currently about how it’s performing outside the domestic market.

Uncharted and Jujutsu Kaisen 0: The Movie rounded out the top 5, with the latter seeing a fairly massive 75% drop from last weekend with $4.5 million.

Further down the list, the only other new release to make the top 10 was Infinite Storm, a Naomi Watts survival drama that took 10th place with $758,919 in 1,525 theaters.

The Per Theater average went to Everything Everywhere All at Once, the Michelle Yeoh starring multiversal spectacle from A24.  It took in $50,966 in each of the 10 theaters it opened in over the weekend.